Amato's Toy and Hobby store to be location in film

Wesley Bunnell | Staff Amatos Toy and Hobby Store will be featured in an upcoming Lifetime movie. Buy this photo 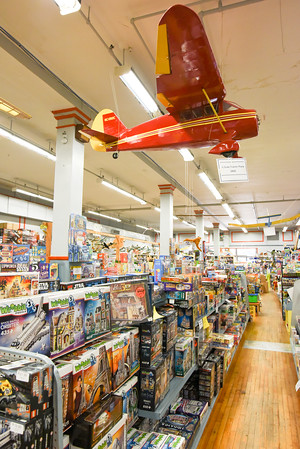 NEW BRITAIN - The Hardware City will go glam next week as it will be used as the backdrop for a movie featuring TV stars Mario Lopez and Melissa Joan Hart.

Amato’s Toy and Hobby at 283 Main St. will be a main location for the movie about two competing toy store owners, played by Hart and Lopez, who team up to fight off a corporate toy store. In the mix of taking down the corporate giant, the two characters end up falling in love.

The movie, titled “Christmas Hours,” will have a theatrical release just in time for Christmas this year.

Steve Amato, owner of Amato’s Toy and Hobby store, said it all started when he and his wife were having dinner at West Side Tavern and started up a conversation with a couple of men sitting nearby.

It turned out that one of them was part of a movie production company based out of Rocky Hill. The man ended up reaching out to Amato a couple of months ago to let him know he was being contracted to do a movie involving toy stores, and was thinking about using his shop as a possible set.

“They told us they loved it so much they were gonna use it,” Amato told The Herald.

At first, the production team was just going to film the toy store, but they quickly fell in love with the whole city.

“It’s so beautiful,” said Paula Hart. “It (the location for the film) needed to be somewhat urban and picturesque.”

“We have a new floor to ceiling green screen so they can put actors in the foreground and video or special effects in the background,” Palmer said.

She said the scenes being shot will include a wintry one with a toboggan run and one to make it look like they are in a corporate environment.

CCSU is a public campus so onlookers hoping to catch a glimpse of Hollywood actors and the film crew can stop by, but Palmer said all the filming will be indoors in the school’s Media Center.

Anita Fazio, principal of Gaffney Elementary School and a resident of New Britain, said the film crew will be shooting a scene with Lopez at her home on Monday.

She said location scouts came by her neighborhood a few weeks ago on the West End of the city and dropped letters in random mail slots asking if anyone would let them use their home for a movie scene.

“We’re absolutely thrilled that Hartbreak Films has picked our city to shoot a movie in. We are doing our best to accommodate the needs of shooting a feature film here and making everyone feel welcome,” Mayor Erin Stewart told The Herald.

In 2006, the Connecticut General Assembly established a tax credit program to encourage the production of digital media and motion pictures in Connecticut.

The legislation makes it possible for eligible production companies to receive a tax credit of up to 30 percent on qualified digital media and motion picture production, pre-production and post production expenses incurred in the state.

The bulk of the shooting will be done in New Britain, but Paula Hart said other Connecticut towns like Bristol will also be used.

The course of the movie’s production in New Britain will last a couple of weeks, she said.

Details about locations and how it will effect business hours at Amato’s Toy and Hobby are still being worked out.

“It’s cool, I’ve never seen a movie be made before,” Amato said.

Angie DeRosa can be reached at 860-801-5063 or aderosa@centralctcommunications.com.