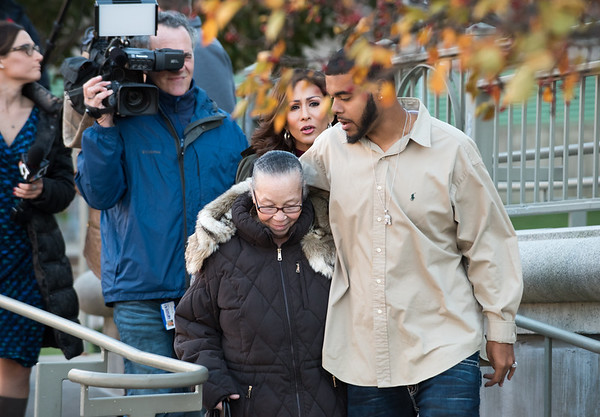 ‚ÄãSkyler Frazer | Staff Brian McKinney and Tiffany Menard hold a photo of their mother, Mary Jane Menard, after her killer, William Devin Howell, was sentenced Friday. The photo was on display in the courtroom during the sentencing. Buy this photo

NEW BRITAIN - More than 14 years after her mother‚Äôs disappearance, Tiffany Menard had the chance Friday to finally tell serial killer William Devin Howell of the anguish he caused her family and others.

‚ÄúI would see her on the street at least a thousand times, only realize it wasn‚Äôt her,‚Äù Menard told a courtroom packed with family, police, court staff and media. ‚ÄúI always hoped she could still be alive.‚Äù

The 47-year-old Howell was sentenced to 360 years in prison Friday on charges that he had killed Diane Cusack, Mary Jane Menard, Joyvaline Martinez, Melanie Ruth Camilini, Danny Lee Whistnant and Marilyn Gonzalez during a 10-month span in 2003.

He was already serving a 15-year sentence in the death of Nilsa Arizmendi, who also disappeared in 2003, when he was arrested in 2015 and charged with six counts of murder and other crimes.

It took New Britain State‚Äôs Attorney Brian Preleski and a team of New Britain police officers 10 years to find and identify the other victims and bring Howell to justice. All six bodies were found in woods behind a strip mall on Hartford Road in 2007 and 2015.

In the end, as Howell was about to be sentenced, Preleski refused to speak his name, saying it should be forgotten as the memory of his victims lives on.

‚ÄúThese women and this man were parents and they were children and siblings, but what‚Äôs clearest of all was that they were loved,‚Äù Preleski said ‚ÄúThey were loved fiercely and unconditionally by so many people, the people you see here today and the people whose hearts are so broken that they couldn‚Äôt bring themselves to be here today.‚Äù

Menard told the court that the disappearance of her mother in October 2003 resulted in two suicide attempts and bouts with drinking and despair.

‚ÄúSince her disappearance my family and I had to endure countless years of not knowing what happened,‚Äù she said.

She was a person who helped people who suffered with addiction, Menard‚Äôs brother, Brian McKinney, said. She was a single mother who raised two children on her own and never met her two granddaughters, who were born after she disappeared, he added.

‚ÄúShe was my sister, my best friend. She was strong and giving and beautiful,‚Äù Mary Jane‚Äôs sister, Anna Santiago, said. She went on to tell the court in a statement read by Tiffany that she had been waiting for this day for years.

‚ÄúWhat has kept me focused all these years is the day when we would get justice for the murderer that killed her,‚Äù Santiago added. ‚ÄúAlthough there is not enough time that could be given to him to justify the horrendous amount of pain he‚Äôs caused.‚Äù

April Rich spoke of her brother, Danny Lee, who was soft-spoken and easygoing and enjoyed listening to soft rock music in his room.

Howell dressed in a prison-issued orange jumpsuit, shackled at the waist and feet, sat quietly as the family members of his victims spoke. His gaze seemed to focus on a large framed photo of Joyvaline Martinez, with her black hair shining, a large hoop earring and red lipstick highlighting the smile on her face.

Martinez cherished holidays and birthdays with her family, said her sister, Sandra, who called Howell a ‚Äúdemon.‚Äù

The family knew something was wrong when Joyvaline didn‚Äôt show up for her 24th birthday party in late October 2003, she said before calling Howell ‚Äúlow-life scum.‚Äù

Howell told the court that he didn‚Äôt have an explanation why he killed his victims.

He went on to say, as tears streamed down his face, that he wished the state still had the death penalty and he hoped that the fact he had diabetes will be a consolation to the families.

‚ÄúThe acts I committed were monstrous, cowardly and selfish,‚Äù he concluded. ‚ÄúIf I could bring them back, I would.‚Äù

Each of the families showed ‚Äúcourage in the presence of evil,‚Äù New Britain Superior Court Judge Joan Alexander said as she prepared sentence Howell to six lifetimes in prison without the possibility of parole. ‚ÄúThey never gave up hope and their hope was for justice for their loved ones.‚Äù

Sandra Martinez, who attended nearly every one of Howell‚Äôs court dates since his arrest in September 2015, said she felt peace after the proceedings were over.

‚ÄúI felt peace that I was able to speak what I felt and let everyone else in the courtroom know who my sister was,‚Äù she said. ‚ÄúNow he‚Äôll get what he deserves, dying slowly in jail. I feel no pity for him.‚Äù