HRA back in action, helping people displaced by hurricanes 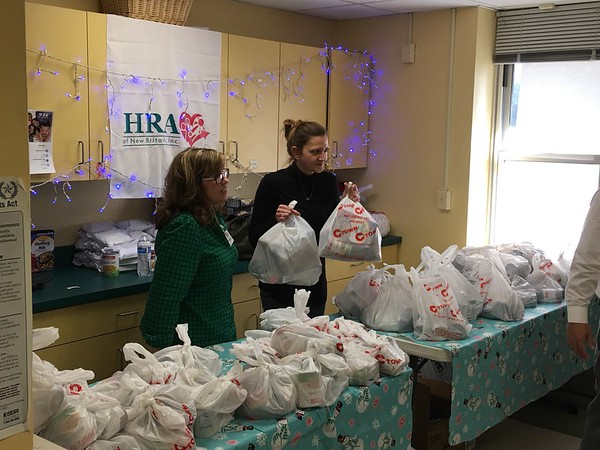 NEW BRITAIN - Just a day after distributing hundreds of turkeys to needy city residents, the Human Resources Agency of New Britain helped families displaced by hurricanes get the services and support they need.

“The primary purpose of today is to begin to build a relationship with the hurricane evacuee families that entered our communities,” said Marlo Greponne, the HRA’s director of planning and programs, Tuesday afternoon.

Greponne said that, while many families were coming here from Puerto Rico and the U.S. Virgin Islands, many were not contacting social service providers like the HRA. which could help them adjust to life in the city.

“We realized that we were going to need to be more proactive in order to engage them,” Greponne said.

“We’re looking for housing. We lost that in Puerto Rico,” said Milagros Sanchez Fonseca, who has relocated to the city with 11 relatives.

Fonseca, who lived in Caguas, Puerto Rico, before Hurricane Maria, said the two children in her family are already enrolled in New Britain schools.

Many of the families from the Caribbean are also in need of winter clothing.

“It’s a different culture and climate that you have to get used to,” said Leticia Mangual, the HRA’s director of health, wellness and youth services.

After meeting with HRA case managers, families picked up bags of food to help prepare their Thanksgiving feasts. Since turkey isn’t common in Hispanic cuisine, pork and beef were also available.

Tuesday’s distribution was different than Monday’s, which was aimed at the population the HRA already serves.

“In order to get a turkey yesterday, you would have had to sign up in October. Most of these families that are here today signed up their children in November,” Greppone said, explaining the need for another food giveaway.

Aldermen Kristian Rosado, Richard Reyes and Iris Sanchez were on hand, taking names of people and making sure they knew where to go. State Rep. Bobby Sanchez, D-New Britain, who works at the nonprofit in multiple capacities, was also at the Oak Street community center to help with the effort.

The C-Town supermarket on Main Street donated the food and delivered it to the HRA.

“I was really floored when they made the offer,” Greponne said.

Skyler Frazer can be reached at 860-801-5087 or by email at sfrazer@centralctcommunications.com. Follow Skyler Frazer on Twitter @SFrazerNBH