The Bunny Fountain is at the intersection of Huntington Turnpike and Unity Road. It was a gift from the Peet family to the citizens of the Nichols section of Trumbull in 1895. Originally it had a kerosene lamp and a horse trough. Over the years, the lamp was removed and three bunnies and mushrooms were added. In 1931 it was moved to its present location. Marty Podskoch Buy this photo 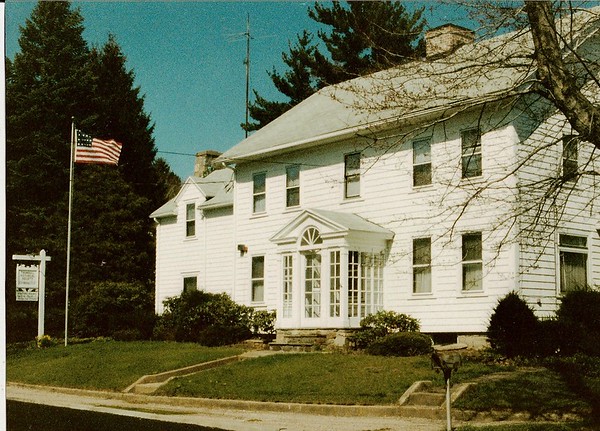 The Trumbull Historical Society Museum at 1856 Huntington Turnpike has displays and offers events to educate the community about their town’s history. John Lauria Buy this photo

When English settlers arrived the area was occupied by the Pequonnock branch of the Paugussett Native American tribe which had an agricultural based society. The word Pequonnock means “cleared field” in the native language and is also the name of Trumbull’s major water source, the Pequonnock River.

In 1639, 17 Puritan families settled in what is now Stratford near the mouth of the Housatonic River. Some land within the present bounds of Trumbull was laid out and surveyed in 1670. By the 1690s homes were built in what is now Trumbull; the first was built for Abraham Nichols who had over 1,000 acres of farmland carved out of the wilderness known as “Nichol’s Farms.” Soon additional families moved into the area, roads were constructed, and sawmills and gristmills sprang up along the Pequonnock River.

By May 1725 there were enough inhabitants in this outpost of Stratford to petition the General Assembly to form a separate parish called Unity. In October of 1744, the farmers living in the Long Hill district of the adjoining Parish of Stratfield merged with Unity. The reorganized parish was renamed the Society of North Stratford. Today’s town boundaries remain unchanged from those established in 1744.

The eastern section of the town of Trumbull was pioneered by families from Stratford; the western section was settled from the village of Stratfield. Each of the farm settlements was established as a church parish with local burial grounds. As the town grew, parishes gave way to school districts that bear the names Nichols (1852), Long Hill (1854), White Plains (1856), Daniels Farm (1857), and Chestnut Hill (1859).

On Oct. 12, 1797, after 11 years of petitioning, the inhabitants of North Stratford won the right to become an independent town. The new town was named Trumbull after Jonathan Trumbull, Connecticut’s colonial governor from 1769-1784, who was an ardent supporter of the revolutionary cause.

After the Revolutionary War, over time, two paper mills and a wool knitting mill were constructed on the Pequonnock River, the Housatonic railroad was built, two different factories began making shirts and underwear, Parlor Rock amusement park was established, a tungsten mine was built, as well as carriage shops, ice houses, and several cigar factories. In 1989 two special events occurred: the Trumbull Little League won the 1989 Little League World Series when they beat Tiawan and the Pequonnock Valley State Park was established.

Pequonnock Valley State Park. A 382-acre park on the east side of the Pequonnock River can be easily accessed from the commuter parking lot on Park Street near the southbound Exit 9 exit ramp of Route 25. From the lot take a short walk to the end of Park Street. to the park’s eastern entrance. http://vizettes.com/pequonnockvalley/

Housatonic Railroad Rails-to-Trails Bike Path. This 12.8-mile trail runs from Bridgeport Harbor to the Newtown Line. An easy starting point is Tait Road near the Helen Plumb building where parking is available. The smooth crushed-stone portion of the trail here follows the original Housatonic rail bed along the west side of the Pequonnock River.

This is an excerpt from the book, The Connecticut 169 Club: Your Passport & Guide to Exploring CT. It was written by local residents to encourage people to visit the beautiful 169 towns & cities in Connecticut. The 8.5 x 11 hardcover book contains 368 pages and over 180 illustrations, maps, and photos. It was edited by Marty Podskoch, author of eight books including the Conn. Civilian Conservation Corps Camps, Catskill & Adirondack fire towers, Adk CCC Camps, Adk 102 Club, and Adk illustrated stories. The travel book will be available in late summer 2018. One can pre-order a signed book with free shipping by sending $24.95 plus CT sales tax $1.58 to: Podskoch Press, 43 O’Neill Lane, East Hampton, CT 06424 Also available in late summer 2018 at local stores, Amazon, and Barnes & Noble. Information (860)267-2442 podskoch@comcast.net or https://martinpodskoch.com