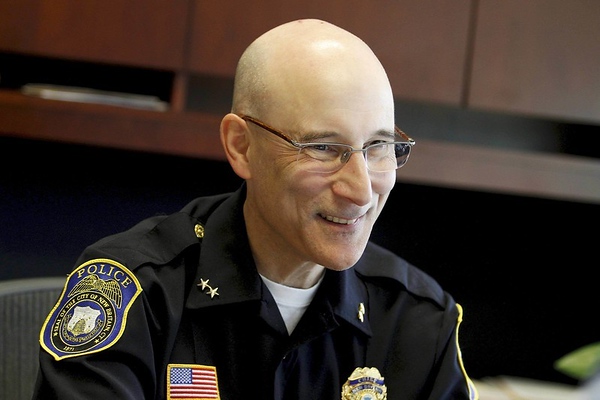 NEW BRITAIN – William Tisdol contends his son was never involved in a string of violent robberies that played a role in city officers shooting the 16-year-old and two of his friends, killing one, the night of Dec. 14.

“He’s a great kid,” William Tisdol said. “The teachers at his school, people in our community, everyone will tell you what a good kid he is.”

Caleb Tisdol, of Windsor Locks, who was 15 at the time, was one of three people shot by New Britain police that night in a vehicle that allegedly was moving to strike officers on foot in an attempt to flee. The driver, 20-year-old Zoe Dowdell, was killed. The 15-year-old and Noah Young, 18, of Bloomfield, were wounded.

After months of waiting for the investigation into the incident to be completed, William Tisdol, the families of the other two men shot, and advocates from Hartford are asking police and prosecutors to release the dash cam videos showing what happened the night of the shootings.

“We want people to see it from every angle,” William Tisdol said. “We don’t want there to be any wiggle room on what happened that night.”

William Tisdol and dozens of others marched from New Brite Plaza to the New Britain Police Department Saturday in a show of solidarity for the release of the videos. But Police Chief James Wardwell issued a statement saying that his hands were tied until John Smirga, the States Attorney for the Fairfield Judicial District, completes his review of the use of deadly force in the shootings. Smirga was unavailable for comment Monday.

The five officers who fired their weapons have been on desk duty since the night of the shootings, Wardwell said. “All decisions on the investigation are handled out of (Smirga’s) that office exclusively,” Wardwell said in the statement. “The New Britain Police Department and all personnel do continue to offer full cooperation as needed to further this investigation. Any additional comment or involvement by the New Britain Police Department in this independent investigation would create a bias that would hinder or interfere.”

The New Britain chapter of the NAACP has continually been in discussions with Wardwell about the incident, said chapter president Ron Davis. “It’s still in the investigative phase,” Davis said. “There is nothing we can do to get the video. We’re waiting for the state’s attorney.”

Meanwhile William Tisdol said his son has been held in jail for months after watching his friend die. “He told me that night they were going to a studio to record some music,” William Tisdol said. “I’m 100 percent sure my son wasn’t wrapped up in that stuff.”

An arrest warrant served on Caleb Tisdol April 24 alleges that the teen fired a .25 caliber pistol at a pizza delivery man who had brought a pizza to a Windsor address just before 12 a.m. on Dec. 7.

The delivery man was robbed at gunpoint by two males for the $40 to $60 in his pocket, struck in the face with a pistol “that felt heavy like it was real” and shot at as the thieves fled the area. They tried to steal his car, but it was locked, he said. DNA found on the vehicle where the suspects tried to open the door handle belonged to Caleb Tisdol, Windsor police said.

The state forensics lab determined that spent bullet shells found at the Windsor robbery scene were fired from a .25 caliber pistol found Dec. 14 in Dowdell’s car. Caleb Tisdol was also charged with a North Haven armed robbery that occurred in early December and an East Hartford armed robbery that happened in October. He is being prosecuted as an adult in all the cases.

Tisdol, Dowdell and Young were considered suspects in at least four violent New Britain robberies that occurred in the weeks before the shootings, police said. In one robbery, a suspect fired a gun at a victim’s car as the victim sped away. Officers found two different types of bullets had struck the car, court papers said. Within the same hour, a second victim was pistol-whipped during a separate robbery. No one has been arrested in those cases. A third victim in a separate robbery was forced out of his car at gunpoint. Young was charged in April by New Britain police with committing that robbery.

The night of the shootings, New Britain police were looking for Dowdell’s car which they believe had been involved in the recent robberies. It was spotted and boxed in near Chapman Street. “We want the video footage released so we can see if what the police say is corresponding with what’s on that video,” said Cornell Lewis, an activist who helped organize the protest. “There seems to be a controversy over what happened. But releasing the video could put everyone’s mind at rest.”