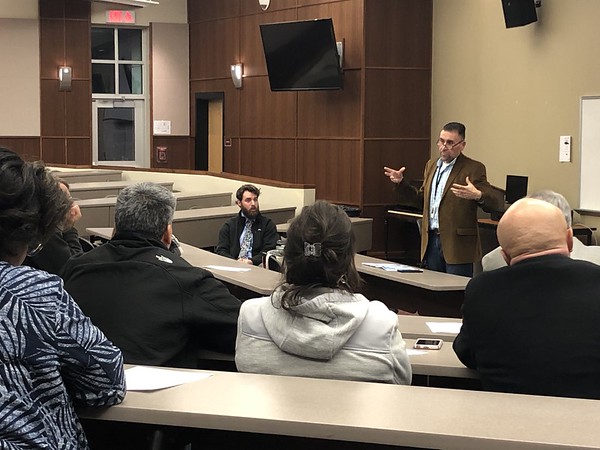 Sanchez spoke about increasing the eligibility in the Care 4 Kids program to parents who are enrolled in school and a proposal to pay an equitable wage for preschool teachers.

Care 4 Kids is a program that helps low-to-moderate income families in Connecticut pay for child care costs. The program is sponsored by the Connecticut Office of Early Childhood, according to its website.

“I think our education committees are probably the most bipartisan in the state. I’m all about kids. It’s not about being a Democrat or Republican. It’s about educating the kids of Connecticut. We are still struggling. We have an achievement gap,” Sanchez said.

Other issues discussed Friday included changing the age cut-off date for kindergarten students and the 2019-20 Board of Education proposed budget increase.

District Coordinator of Partnerships and Engagements Sondra Sanford kicked off the discussion by describing plans to revamp the existing technology wing for the New Britain High School MET Academy. She said they are working with community partners to raise money for equipment such as 3D printers and robotic platforms.

“For kids who are looking into engineering, it’s a perfect pathway. I want to arm them with the skill set to go to college or get some money before they go to college. Students understand that manufacturing today is much different than it was 50 years ago,” said Sarra.

Parents also had an opportunity to speak at the forum. New Britain mother of two, Yessica Orbegozo, described some hardships she’s been having with the public school system. She said she is looking to transfer her daughter out.

“It doesn’t matter how much money you get, I don’t see any movement. It’s not only about money-it’s about what you do educating,” she added.

Sanchez said the forum accomplished what he hoped it would.

“I think it went well. Some people had some really good questions and there were good conversations with the Board of Education. I came in with some information and people walked out with some knowledge they probably didn’t know about,” Sanchez said following the meeting.