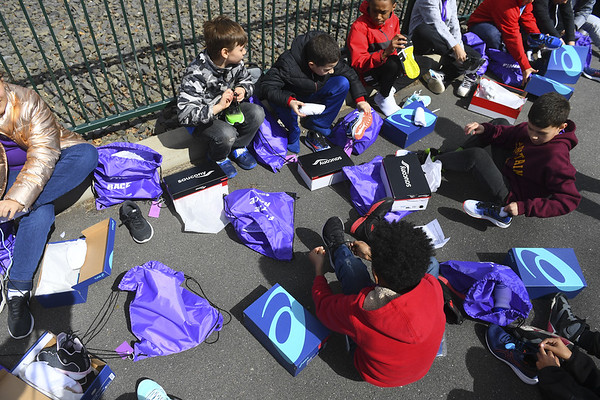 Submitted by CCSU City fifth-graders try on their sneakers given to them during Wednesday’s “Love Wins: Finish the Race” event at CCSU in New Britain. Buy this photo

Karla Santos | Lauren Turenne of the admissions office at CCSU, spoke to fifth graders about the importance of a college career. She went over some of the career and degree options offered at central and explained how much money they could earn depending on how much of a higher education they experience. Buy this photo

Submitted by CCSU 5th grade students from the New Britain school district perform a drill on the CCSU football field during the Love Wins "Finish the Race" event held annually at CCSU and sponsored by the Ana Grace Project. The day is designed to give students a college experience for the day and open their minds to the possibilities after school. Buy this photo

NEW BRITAIN – Approximately 400 fifth-graders from the Consolidated School District of New Britain spent part of their day at Central Connecticut University on Wednesday learning that high school doesn’t have to be the end of the race.

The “Love Wins: Finish the Race,” event, was organized by the Ana Grace Project to give elementary school children a taste of college.

“The idea is that these young children will get a taste of college from CCSU students and will leave the campus with the belief that after high school there is a world of possibilities awaiting them,” Nelba Márquez Greene, director of the CCSU Ana Grace Project and a family therapist, said.

Márquez Greene founded The Ana Grace Project to honor her daughter Ana who was killed during the Sandy Hook Elementary School shooting in 2012.

The “Love Wins: Finish the Race” activities started at Welte Auditorium were students participated in a brain break activity and heard short speeches about the importance of higher education. Students also learned about some of the career and degree options offered at CCSU.

“We are extremely pleased to partner with The Ana Grace Project on this critical initiative,” Zulma Toro, CCSU president said. “We couldn’t be more supportive of its mission to promote love and build community and connection for every child and to impart the message that education is the path to a successful future.”

Check back later for an update.