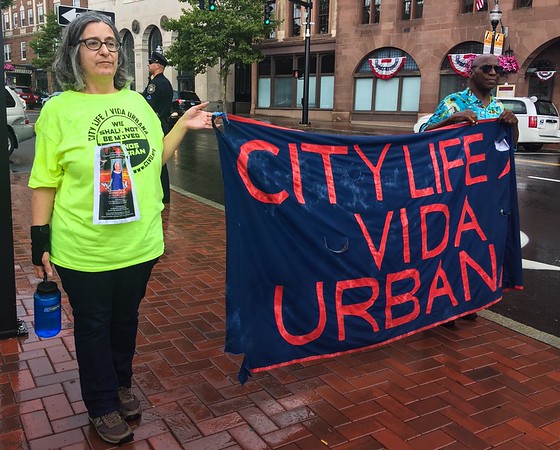 Michelle Jalbert | Staff Irene Glassman and Jean Paul Doh protest in the rain in support of a group of women facing eviction. Buy this photo 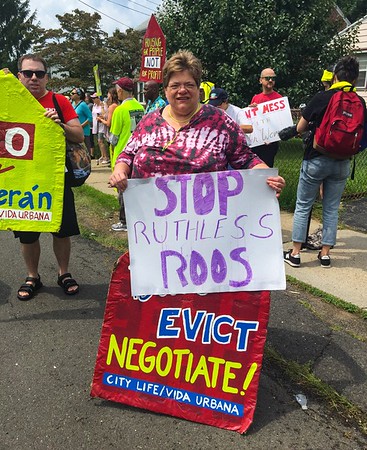 NEW BRITAIN – Protesters filled Central Park Saturday to support a group of women facing eviction from a Boston rooming house owned by the Daughters of Mary of the Immaculate Conception, an order of nuns based in New Britain.

Carrying posters and a megaphone, demonstrators rallied in the rain in support of the residents of Our Lady’s Guild House (OLGH). As thunder cracked above, they chanted, “What do we do when the nuns attack? Stand up, fight back,” and, “We are here to prove: We will not be moved.”

City Life Vida Urbana, a Massachusetts nonprofit that fights for housing justice, and affordable housing developer Fenway Community Development Corp organized the protest. Residents of the house and supporters traveled from Boston to get their voices heard.

According to a press release from City Life Vida Urbana, the 120-unit in downtown Boston that offers women transitional and temporary homes is managed by Mark Roos Realty. Around 100 demonstrators protested in front of the realty office last August after eviction notices were sent out in July, 2018, said the release.

The release also mentioned an article from The Boston Globe that said residents of Our Lady’s Guild House have contacted the Massachusetts Attorney General’s Office about concerns over age discrimination. The release said 10 to 20 of the women being evicted were older than 60. According to the Globe article, Massachusetts Attorney General Maura Healey’s office is investigating the discrimination and the evictions are on hold until the probe concludes.

Siobhan O’Connor, who has lived in the house since 2013 and is now facing eviction, said, “We should all have a choice to live in affordable housing.”

“It’s older women. We’re on a limited income. I’m a practicing Catholic. I do go to Mass in the building, and I feel that they’ve gone from a nonprofit mission to a profit mission,” O’Connor added.

The press release from City Life Vida Urbana stated that the nun’s mission is “provide safe and affordable housing for single women, working women, retired women or students.” However, OLGH’s website recently described itself as “a short-term residence for women between the ages of 18 and 50 years old who work in the Boston area and/or attend school or internship programs.” That statement was edited after the tenants started to organize, said the release. The press release also added that some of the units have been listed on AirBNB, a short-term rental website usually used by tourists.

“I believe this is against the Catholic values,” said O’Connor. “That’s not what a Catholic nun is supposed to do. They’re supposed to be giving service and helping people.”

O’Connor said in 2017, OLGH started to process her for no-fault eviction.

“In 2018 I got in touch with a housing court lawyer and she did agree that it was age discrimination,” she said.

The Globe article mentioned that some residents have lived there for decades.

Resident Marci Wells came to Boston for school and is not facing eviction. She attended the protest in solidarity with the women who are.

“It sickens me as a human being and it should sicken everyone who has an elderly mother, elderly grandmother, elderly aunt that they can be evicted because of their age,” she added.

Wells then referred to the Bible, quoting from Timothy 5:2: “The elderly women, you need to treat them as mothers or as sisters.”

Following the protest in Central Park, demonstrators attempted to deliver a petition to Daughters of Mary of the Immaculate Conception on Osgood Street.

When police contacted the group of nuns, the Daughters of Mary of the Immaculate Conception said they didn’t want to speak to the demonstrators and didn’t want them on their property.

“So effectively, the nuns are refusing to talk to us today,” said Helen Matthews, communications coordinator for City Life/Vida Urbana. “Which is really a shame.”

That didn’t stop protestors from chanting.

“Housing is such an issue. It’s an essential thing. It’s a right,” said volunteer Robin Barnes. “And the real estate corporations and developers are doing all they can to buy land cheaply, let it run down, evict tenants and turn it over for high profits. So we say, ‘people before profits.’”

“The mission of Our Lady’s Guild House is and always has been to provide short term residential housing to single women. In 2014, the previous management company worked with tenants to implement new lease agreements, which made it clear that the building is designed for transitional, not permanent, housing. Since then, The Daughters have been able to improve services, manage the building efficiently, meet tenant needs and reinvigorate the mission of offering transitional, affordable housing to women of all backgrounds. OLGH is and always has been a home for women who are seeking transitional housing. It is important that the mission continues and that the building remains one where women can take advantage of the affordable rent and convenience of living in the heart of Downtown Boston as they look for long-term housing. It is extremely unfortunate and disheartening that, despite our ongoing attempts to work collaboratively with the tenants, they have taken an aggressive approach that makes false claims against the Daughters of Mary of the Immaculate Conception, and the property management company.”

Our Lady’s Guild House petition states their demands are:

Reverse their decision to terminate leases with long-term older residents at Our Lady’s Guild House as of July 31st, 2018. The impending evictions are for no fault, nor for any other legitimate reason than refusing to continue to lease to older women. As these women are denied lease renewals, their very rooms are being advertised online to attract new and younger tenants.

Provide new and renewable leases that allow these older women to remain at Our Lady’s Guild House as long-term residents, instead of forcing them out of their homes. Single-room occupancy is the only housing they can afford in Boston.

Reverse the new policy of short-term rentals in this 120-room building, which limits leases to two years while adding AirBnB hotel-like rentals. This practice is displacing low-income Boston residents in favor of transitory, mostly-affluent visitors and students, as well as reducing the critically needed inventory of permanent housing in the city.

Karla Santos contributed to this story.