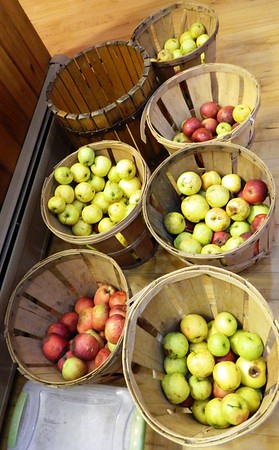 Apples of many varieties were churned into the sweet and tart drink at the Harry Barnes Memorial Nature Center over the weekend. Families stopped in Saturday and Sunday to try their hands at cranking the cider press, a traveling tool that belongs to the Environmental Learning Centers of Connecticut.

“Do you guys know the difference between apple juice and apple cider?” program coordinator Fern Vaughn said to the first group to take part in the experience Sunday morning.

Joe Narus and his kids Mary, 7, and Liam, 5, were the first guests to arrive at Barnes that day.

“In the summer time we come here to walk the trails, but in the winter time we come more for the programs,” Narus said. “The kids love to run around here, see the animals and play in the discovery room.”

His son was eager to get to the apple pressing, which began as soon as more kids walked in.

Vaughn instructed each child to pick out two apples from baskets next to the press. Then they took turns placing the fruit inside the bucket and pressing it by winding a crank.

“It’s something fun to do in the fall,” Michelle Bashaw said, as her daughters Macey, 8, and Riley, 10, took their turns.

The group learned exactly where the apples originated during the process.

“All of these apples came from our orchard at Indian Rock Nature Preserve,” Vaughn explained. “Remember that wind storm we had earlier in the week? They blew off the trees and we went out to collect them on Friday.”

Cindy Whitman lives in Bristol and brought her 3-year-old grandson Connor and 7-year-old granddaughter Mia, who live in Wethersfield.

“She was asking me recently, ‘Grammy how do you make apple juice?’ And I told her we’d have to find out sometime,” Whitman said. “Now here we are!”

There are over 100 apple trees in Indian Rock’s orchard on Wolcott Road. On them are 10 different varieties of apples. After they were crushed into mush, they were strained into cider, poured into paper cups and enjoyed by visitors young and old.

“This is what all your hard work made,” Vaughn told them. “What do you think?”