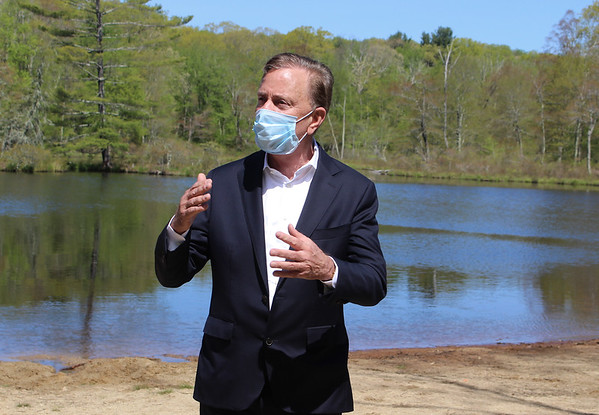 FILE - In this May 21, 2020, file photo, Connecticut Gov. Ned Lamont speaks to reporters at Gay City State Park in Hebron, Conn., updating the coronavirus situation in the state. A bipartisan group of Connecticut legislators gave the governor a list of issues to be reviewed in an upcoming, independent third-party investigation into the preparation and response to the coronavirus inside nursing homes and assisted living centers. (AP Photo/Pat Eaton-Robb, File) Buy this photo
Published on Tuesday, 30 June 2020 13:58
Written by

HARTFORD - Connecticut plans to expand a year-round employment program for youths to include opportunities in the COVID-19 age, including work as social distancing ambassadors and promoters of safer health practices.

Democratic Gov. Ned Lamont announced Tuesday he has authorized releasing $2 million from the Coronavirus Relief Funds to broaden the Connecticut Youth Employment Program to include employment with community-based agencies throughout Connecticut.

The funding comes from the state's portion of the federal CARES ACT. It will be added to the $4.5 million the state previously allocated for the program, for a total of $7.1 million this year.

“Not only will this help more youths gain employment during this difficult time, but it will also enhance the critical efforts of community health agencies in their response to the pandemic,” Lamont said in a recent statement.

Some of the job opportunities under the expanded program will include virtual outreach through social media to promote safer health practices; delivering educational materials to community and other organizations; providing help to homebound families; and reaching out to young people and acting as social distancing ambassadors.

For most people, the virus causes mild or moderate symptoms, such as fever and cough. For some, especially older adults and people with existing health problems, it can cause more severe illness or lead to death.

In other coronavirus news in Connecticut:

Secretary of the State Denise Merrill said Tuesday that absentee ballot applications are being mailed this week for the Aug. 11 primary to eligible registered Democrats and Republicans as part of an effort to help accommodate voters who don't want to go to the polls because of the pandemic.

“We want to make sure that people have plenty of time to get those applications back to their local town,” said Merrill, a Democrat, who noted large lines at the polls in other states where absentee ballots were not mailed out in time for the primary. A group of Republicans, including two state legislators, have sued to block the plan, arguing it could increase the likelihood of voter fraud.

Both Merrill and Lamont have called on state lawmakers to make Connecticut's rules for obtaining an absentee ballot less restrictive so people can cast a ballot from home in November as well. The General Assembly is tentatively planning to hold a special session this summer.

Merrill on Tuesday selected the ballot order for the presidential primary. For Republicans, President Donald Trump will top the ballot, followed by California businessman Rocky De La Fuente and then “uncommitted“ to a candidate. For Democrats, former Vice President Joe Biden will top the ballot, followed by Vermont Sen. Bernie Sanders, Hawaii Rep. Tulsi Gabbard and then “uncommitted.” There will also be primaries held in some congressional districts as well.