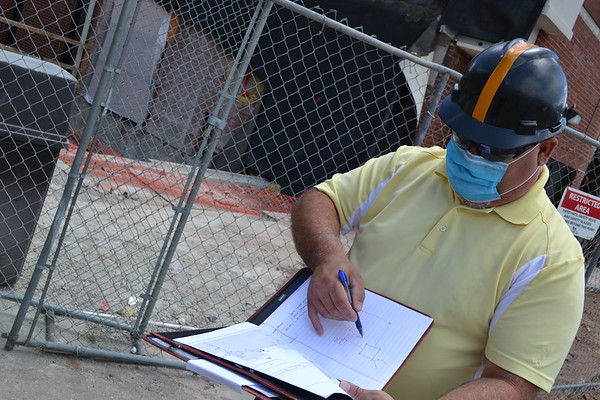 Courtesy of Bristol Health Renderings of what the Bristol Hospital Emergency Center will look like once renovations are complete. Buy this photo

Courtesy of Bristol Health Renderings of what the Bristol Hospital Emergency Center will look like once renovations are complete. Buy this photo

Hospital officials are hoping in September to begin erecting the steel structure to a 12,500-square-foot addition, and by the fall, local ambulances should be using bays in their permanent home.

The construction site, which sits on Newell Road, is still undergoing underground electrical work. Thomas Roche, director of facilities and construction at Bristol Hospital, said some utility wires that run along the road, which is owned by the hospital, will be taken down for underground wiring - which he said is being done for aesthetics purposes.

Construction broke ground in February and has mostly remained on schedule. The renovations to the existing Emergency Center and a 12,500-square-foot addition are part of a four-phase, $15 million project.

Newell Road, which leads to the Emergency Center entrance, will no longer be a one-way road and will now circle in a U-shape off of and back onto Goodwin Street. The project‚Äôs architect, Ronald Goodin, of Phase Zero Design, said the U-shaped road will be much safer and better for ambulance drivers.

‚ÄúThis is a big project for this town, for this hospital,‚Äù Goodin said.

Goodin, who formerly worked as a VP of facilities in another hospital, has built a long-term relationship with Bristol Hospital, winning multiple project team awards in the process on previous endeavors. The outside area around the Emergency Center will give individuals a chance to get out of the hospital during what could be a very stressful time to take a breather in a relaxed environment.

The inside of the Emergency Center will also have as much of a calming effect as possible, he said.

‚ÄúThere‚Äôs going to be a lot of things that won‚Äôt make it look like an Emergency Department,‚Äù Goodin said.

The main area in the center will resemble a rotunda with a water wall near the entrance and high ceilings, giving it more of a ‚Äúspa-like‚Äù feel, Goodin said.

‚ÄúIt‚Äôs just a very organic design,‚Äù he said, adding that the nurse‚Äôs station will take on a figure eight, allowing nurses to have visibility over all their patients.

‚ÄúWe want people to feel more relaxed and take the stress out as much as possible,‚Äù Goodin said.

Mary Lynn Gagnon, executive director of the Bristol Hospital Foundation, said fundraising for the Emergency Center project has raised ‚Äújust about $3.9 million.‚Äù Though the goal has been to raise $4.5 million, the coronavirus pandemic has made that more difficult, causing several fundraisers to be rescheduled or canceled.

‚ÄúOne thing covid has taught us is how important the Emergency Center is,‚Äù Gagnon said, adding that the foundation will be reaching out to community members for help through a social media and a mailing campaign.