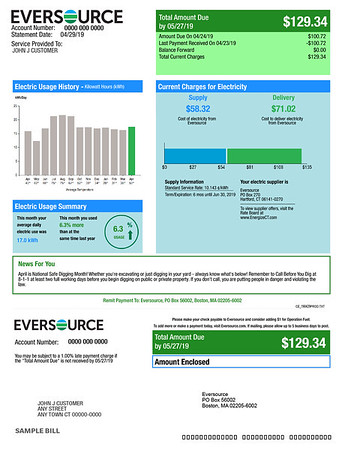 Connecticut regulators on Friday ordered Eversource, the state's largest electric utility, to temporarily suspend a rate increase that appeared in customers’ July bills and immediately restore rates to their June 30 levels so an investigation can be conducted into whether customers are being overcharged.

The Public Utilities Regulatory Authority said in a letter to the utility's attorney that it has received numerous letters and complaints from customers shocked by their larger-than-normal electric bills, some twice as much as they usually pay, which Eversource said were driven primarily by a significant increase in summer energy use and two recent delivery fee increases.

“The intent of this reexamination is to ensure that Eversource is not over-collecting revenues in the short term at the expense of ratepayers during this period of financial hardship,” PURA Executive Secretary Jeffrey R. Gaudiosi wrote in the letter.

Republican and Democratic state legislators, members of the state's congressional delegation Attorney General William Tong and others have all demanded answers about the rate increase and how the utility is calculating the delivery fees. Members of the eastern Connecticut delegation accused Eversource of trying to blame the increases on a power purchase agreement with Millstone nuclear power plant in Waterford, which they argue would not double people's bills.

Eversource, which has fielded thousands of calls from customers this week, said Friday it planned to offer “energy efficiency and payment support solutions, including a no-fee, no-interest COVID-19 payment plan,” according to a news release.

“We share the concerns of our customers and know that this is an unexpected cause of distress during an already challenging time,” Eversource Senior Vice President and Chief Customer Officer Penni Conner.

On Friday, in a call with Wall Street analysts, a presentation from Eversource cited “distribution rate increases” as one of three “key 2020 earnings drivers."

“A full investigation must take place and we are encouraged to see that public comment is now being accepted and welcomed in the process,” they wrote. "Especially during these challenging times when many families are struggling financially, we need to make sure ratepayers are not being overcharged and have protections in place.”