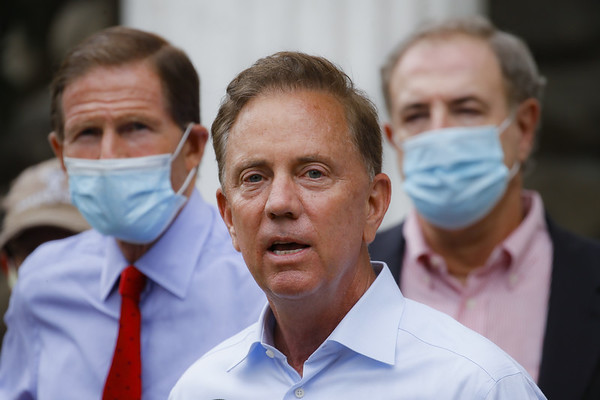 FILE- In this Aug. 7, 2020, file photo, Connecticut Gov. Ned Lamont addresses the media in Westport, Conn. During a coronavirus briefing on Thursday, Aug. 20, 2020, Lamont said the Connecticut Department of Labor will be applying for a federal program that could lead to $300 in additional weekly unemployment benefits for certain recipients who've lost work because of the coronavirus pandemic. (AP Photo/John Minchillo, File) Buy this photo
Published on Tuesday, 22 September 2020 12:13
Written by DAVE COLLINS

HARTFORD - Connecticut is forming an advisory group to validate the safety of any coronavirus vaccines and how to distribute them to the public, Gov. Ned Lamont said Monday.

Lamont said the goals are to make sure the vaccines are not harmful, the public can have confidence in them and they are distributed with priority going to certain populations such as nursing homes, first responders, schools and colleges while supplies are limited at first.

The co-chairs of the committee are acting Public Health Commissioner Deidre Gifford and Dr. Reginald Eadie, president and chief executive of Trinity Health of New England, who both joined Lamont at a news conference Monday. Members will include vaccine experts, state officials, labor representatives and advocates for communities highly affected by the virus.

“I'm trying to build people's confidence to take the COVID-19 vaccine,” the Democratic governor said. “That’s why I’ve got these two people sitting here right now to make sure you know we’re not going to let anything get out into our greater population until the smartest of the health care community in this state, not to mention in Washington D.C., says it’s the right thing to do.”

Lamont cited comments by Dr. Robert Redfield, director of the federal Centers for Disease Control and Prevention, that a vaccine is expected to be widely available by April.

Lamont also said Monday that the positive test rate for the virus in the state has dipped back down to about 1.1%, down from 1.6% last week. The rate has been above 1% for nearly two weeks, after weeks of having been below 1%.

Officials reported 68 people were hospitalized in Connecticut with COVID-19 on Monday, down seven from Friday. Three more people died, bringing the total to 4,495. More than 56,000 state residents have tested positive for the virus since the pandemic began.