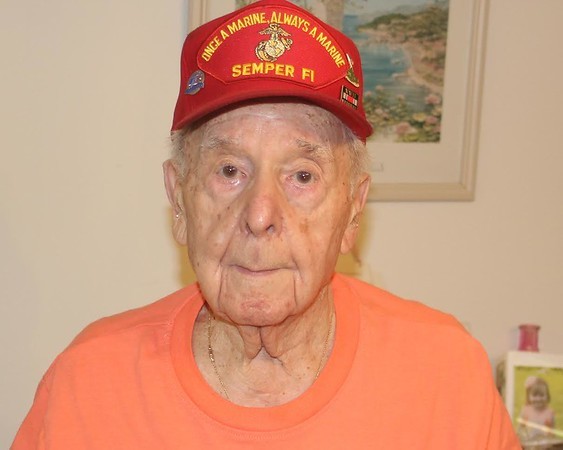 BRISTOL – Local World War II Veteran and Marine Joe Caminiti will be honored for his service and efforts to support the Gold Star Family Memorial Monument at The Legacy Foundation’s luncheon on Sept. 17.

The Legacy Foundation was established by Gary Roy and Marianne Mihalyo in conjunction with the Woody Williams Foundation.

"Joe will be one of the World War II veterans to be honored at the first Legacy Foundation Luncheon," American Legion Post 2 historian Neal Supranovich said. "The luncheon is being held to honor World War II Veterans."

Caminiti served with the U.S. Marines in World War II from 1942 to 1945. He also later served in the Korean War. During World War II, he operated one of 482 amphibious tractors which helped the troops to make a landing on Iwo Jima. Following the battle, Caminiti witnessed the famous flag-raising on Iwo Jima from the nearby airstrip.

Caminiti once regularly attended reunions of other Iwo Jima survivors. Through his work with the Iwo Jima Survivor group, he got to know Gary Roy and Marianne Mihalyo, the chairpersons for the Gold Star Family Memorial Monument that was built in Berlin. The project was headed by the Woody Williams Foundation. Woody Williams, who died June 29, was the last Medal of Honor recipient from World War II.

"For his work, and being a World War II Iwo Jima Survivor who was from the same division and on Iwo Jima at the same time as Woody Williams, the Foundation arranged a meeting between Caminiti and Woody Williams," said Supranovich. "He was to come to Connecticut to unveil the monument that his Foundation helped build. The week before the meeting Woody fell and was unable to travel. Williams sent his grandson, Chad Graham, a day ahead of the dedication to meet with Joe."

Graham presented Caminiti, along with another World War II Veteran who helped the Foundation, with a Woody Williams Medal of Honor coin at the Iwo Jima Park in Newington.

The next day, on Saturday, April 23, they attended the dedication of the Gold Star Family Memorial Monument as a special guest of the committee.