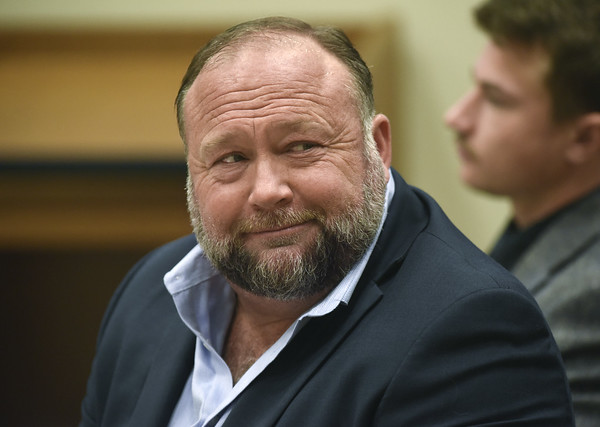 FILE - Infowars founder Alex Jones appears in court to testify during the Sandy Hook defamation damages trial at Connecticut Superior Court in Waterbury, Conn., on Thursday, Sept. 22, 2022. Jones and his company have been ordered to pay an extra $473 million to families and an FBI agent for calling the 2012 Sandy Hook school shooting a hoax. (Tyler Sizemore/Hearst Connecticut Media via AP, Pool, File) Buy this photo
Published on Wednesday, 23 November 2022 11:07
Written by

AUSTIN, Texas - A Texas judge said Tuesday she will not lower a nearly $50 million punishment against Alex Jones that a jury handed down earlier this year over the Infowars host spreading false conspiracy theories about the Sandy Hook Elementary School massacre.

Since that August trial in Texas, other judgments against Jones in Connecticut have stacked up to a staggering $1.44 billion - setting up what experts say is likely a long fight ahead for Sandy Hook families to try to collect that money.

The decision in Texas by Judge Maya Guerra Gamble is another defeat for Jones and notable because a state law has raised questions about how much of the punishment would stand.

In most civil cases, Texas law limits how much defendants have to pay in “exemplary,” or punitive, damages to twice the “economic damages” plus up to $750,000. But jurors are not told about this cap, and eye-popping verdicts are often hacked down by judges. But Gamble said she would enter a judgment for the full amount.

Jones could appeal and has already said he has little money to pay the damages. He said during the Connecticut trial he has less than $2 million to his name, which contradicted testimony at the trial in Texas. Infowars parent company Free Speech Systems, meanwhile, is seeking bankruptcy protection.