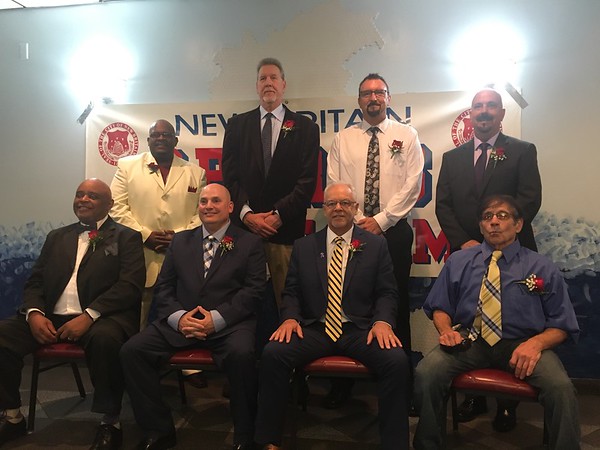 The 24th annual induction dinner saw eight accomplished athletes come together to celebrate a rich history that they each owned a chapter of, as some even helped write the beginning of a new history, whether it be the first undefeated season for a team representing the Hardware City, or the first African-American athlete to be under center for the New Britain High School football team.

“I think this is a very good class,” said Bill Huber, a committee member that helped found the New Britain Sports Hall of Fame almost a quarter of a century ago. “The people we picked are some really good ones. The committee did a good job.”

The committee chose eight entries into the 2019 class, with the first induction being awarded to Bill Carroll, the New Britain High School baseball team’s center fielder in 1971 and 1972. Carroll helped lead the Hurricanes to the Class LL championship game in both seasons, winning it all in 1972 to become the first state champion in program history.

Carroll went on to play at Saint Leo College, where he started in the outfield for three seasons for a Monarchs team that ranked among the top teams in the country at the time.

“This is a wonderful award,” Carroll said. “As a ballplayer and competitor, you don’t think about these kind of things happening to you. You’re facing your competition and it’s all about just trying to be the best you can. This gives you the opportunity to reflect on your career and the support you received. It’s a great honor. I’m very proud to be a part of this.”

When Carroll was leading the Hurricanes to a state championship appearance in 1971, Fran DePalo was competing on the gridiron for the Meriden Shamrocks, a semi-pro football team that DePalo led to three league championships. A member of the New Britain High School football team from 1961-64, DePalo went on to play at CCSU and has only expanded his athletic abilities since.

From an Olympic lifter to an award-winning bodybuilder, DePalo has left his mark on a number of different sports, including in 1992 when he won the Natural USA bodybuilding title in Boston.

“I feel like I deserve to be here,” DePalo said. “There are not too many people that have won trophies in some of the sports that I did. I played a lot of sports and came out on top. The New Britain Hall of Fame is a big award. New Britain has always been big in sports.”

Louis “Rocky” Gagliardi was told his athletic career was over due to a genetic condition in his spine when he was a senior at New Britain High, but that didn’t stop him from leaving his mark at New Britain, winning two state championships as an assistant coach for the Hurricanes football team, leading him to join his late father in the Hall of Fame.

“Sometimes I don’t think I deserve to be here because of the rich history in New Britain and the sports in this town,” Gagliardi said. “My father is in, so that’s really neat. This is a really special occasion for my family. I know he’d be proud.”

Charles “Chuck” McKeon, born and raised in New Britain, also finds himself enshrined aside a number of former friends, teammates and coaches. McKeon, a graduate of St. Thomas Aquinas High School, was awarded the MVP for the school’s first state championship during his playing tenure from 1971-73, earning All-State honors along the way.

Despite all the accomplishments, McKeon didn’t expect a Hall of Fame nod.

“It was a shock when they called and said I was being nominated,” McKeon said. “I looked back at all the people who have been inducted already and noticed all the people I either played with or coached, or had some connection to. New Britain will always be my hometown.”

Adam Pindar will always be a part of New Britain history, having been a part of the city’s first-ever undefeated Fagan Little League championship team before helping the Hurricanes to an undefeated season of their own when he reached high school. Pindar is now enshrined into his second Hall of Fame in New Britain, having been elected to the city’s baseball Hall of Fame 10 years ago after earning All-State honors as a shortstop during his high school career.

Pindar flew in from California to receive Sunday’s honor and revisit some cherished memories from his time in New Britain.

“It’s an incredible honor,” Pindar said. “Being honored like this is pretty special. It brings back a lot of emotion and memories. It’s something I wouldn’t miss.”

Jeff Shaw also enjoyed an accomplished football career, playing his high school days as the former Pulaski High School in New Britain in the 1970s. An All-State Honorable Mention, Shaw shifted his focus to the New Britain karate team, competing regionally and nationally for decades and eventually working his way up to fourth in the country in the Black Belt Senior Fighting Division in 2001.

“I feel very blessed,” Shaw said. “It’s an honor and I don’t have the words to describe how special this feels.”

Gil Wrice left his fingerprints all over New Britain High lore before he graduated in 1971, setting the school’s all-time rushing record for a quarterback during his tenure with the Hurricanes from 1969-71. A two-time all-conference winner and an All-State honorable mention at the safety position, Wrice’s most important contribution to New Britain may be his place as the school’s first-ever African-American quarterback.

“It’s an honor,” Wrice said. “When I was a kid I used to walk up to the fence at New Britain High and peek through and watch them play. To be here today is an amazing honor.”

Wrice’s induction offered him a chance to reflect on the trail he blazed for others after him, something he was reminded of through a letter from one of the next African-American quarterback’s that followed his lead.

“I was just a kid playing football,” Wrice said. “It wasn’t about race and all that stuff. It was just about playing the game and playing for New Britain. But Vernon Black, one of the next African-American quarterbacks wrote me and said ‘I have a lot of love for you because you opened doors.’ I was blown away by that. I had never thought of it like that until now.”

Jason Zaniewski graduated New Britain High in 1987, having earned all-conference honors in basketball and baseball, while also lettering in football. He later played basketball at CCSU and went on to join the coaching staff for the Bulkeley High School girls basketball team, which became the first Hartford-based high school to win a state championship in 2006.

Zaniewski, already a member of the Bulkeley Hall of Fame, now enters a Hall of Fame that he hoped to join since it was created nearly 25 years ago.

“I worked hard all my life playing sports, but I just played because I loved the sport I was in,” Zaniewski said. “But this is special. When I was a kid we didn’t have the Hall of Fame. They started it after I got done with high school, but I really wanted to get in once I heard about it.”

Like Zanieski, the Class of 2019 is packed with New Britain-bred athletes that will now forever be remembered as some of the city’s most impactful competitors, and permanently enshrined in the city’s deep sporting history.