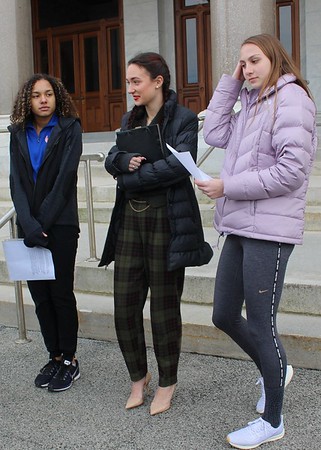 HARTFORD - Lawyers for three Connecticut high school runners suing to block the participation of transgender athletes in girls sports say recent victories on the track by one of their clients should have no bearing on the lawsuit.

Mitchell and two other Connecticut high school runners filed a lawsuit this month seeking to block a state policy that allows high school athletes to compete based on the gender they identify with, arguing transgender girls have an unfair physical advantage.

In seeking to become defendants in the lawsuit, lawyers for Miller and Andraya Yearwood, another transgender athlete, point to Mitchell's Class S victory as evidence that the plaintiffs’ argument is faulty.

But in a court filing Wednesday, Mitchell's lawyers argue that her wins over Miller do nothing to undermine the underlying argument that transgender athletes have unfair advantages.

“What Plaintiffs alleged - and what is true - is that due to physiological differences, female athletes cannot beat ‘comparably talented and trained’ males,” Mitchell's attorneys wrote. “And if Chelsea beat Miller by a hair in a particular race, Miller nevertheless deprived one girl of the second-place title in that race, and pushed the third-fastest girl off the victory podium entirely.”

These are the first races in the seniors’ high school careers that Miller has lost to Mitchell.