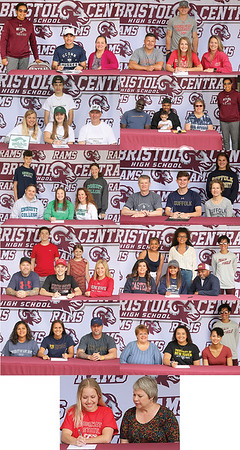 BRISTOL - Bristol Central High School took time to acknowledge its student-athletes moving on to play at the college level on Tuesday morning and there were plenty of names to acknowledge.

In all, 11 Rams took their turn at the signing table outside of the school gym to celebrate their collegiate commitments, with each athlete accompanied by immediate family only, while other athletes waited in their cars to satisfy social distancing guidelines during the coronavirus pandemic.

It wasn’t business as usual for a college signing ceremony, but it was still an opportunity to honor those who were advancing to the next level in their respective sports.

“It’s great they’re still able to have this event,” Central girls volleyball head coach Lance Pepper said. “It's great to give all of these kids the recognition they deserve. They worked extremely hard in and out of season, whether it be track and field, cross country, soccer, lacrosse, whatever it is. To have the ability to still receive that honor and have this ceremony is great for the kids themselves, their families and the town.”

Pepper had two of his players sign on Tuesday, including Peyton Greger, a four-year varsity starter who will be playing at the Division I level next season when she begins her collegiate career at Sacred Heart University.

“She is probably the hardest working kid I've had in four years since being a part of the program,” Pepper said of Greger. “She's a very vocal leader and she leads by example. I think Sacred Heart is going to be a great fit for her, to push her to where she needs to be pushed in order to be the best student-athlete she can possibly be. She'll have the ability to get some time at that level. Of course, the transition from high school to D-I is massive, but I think with her attitude and work ethic, I don't think she'll have any issues making that transition.”

Pepper’s teammate Kathryn Ross will be playing at Endicott College next season after making the All-State second team this year thanks to a .447 hitting percentage in her senior season.

“I think she fits the mold of an Endicott student and I only know this because I'm an Endicott grad,” said Pepper, who played for the school’s current women’s volleyball coach Tim Byram. “I think she's developed drastically over the past few years in terms of putting the ball where she wants to put it and to be an offensive weapon. It will take a little bit of time to get acclimated to the college level in terms of speed, but I believe her work ethic and her ability to work hard every day in the gym, she'll get caught up to speed pretty quickly.”

On the pitch, David Bowes will be heading to Suffolk University after putting together his third all-conference season, thanks to 10 goals and two assists.

“He’s just a fantastic leader,” head coach Nate Jandreau said of Bowes after he was selected to the All-Press team. “He was voted by his teammates as a captain two years in a row, [including] as a junior, which I thought was telling. His speed is literally unmatched by everybody he plays against.”

A pair of lacrosse standouts will be playing in college as well, as Makayla Bunker will take the short trip to the University of St. Joseph, and Haley Riley will play for Bridgewater State College next season.

In the pool, Ben Stafford will be taking his talents to Keene State College after an all-conference season for the Bristol co-op.

“He ran cross country and outdoor track & field for me,” Central track coach Tamara Stafford-Kirk said. “Ben could have pursued running in college, but swimming is his first love. Ben is also my second cousin and I am so very proud to have coached Ben. He has been an integral part of two Class L runner-up finishes in cross country the past two years and also part of our success as an outdoor track & field team.”

While Stafford will be competing in the pool at the next level, four track and field athletes signed on Tuesday, one being Galen Hickey, who will attend AIC after overcoming multiple ACL injuries and finished 13th in the long jump at the State Open.

“I’ve known Galen all his life,” Stafford-Kirk said. “He is one of the kindest and caring young men I know. Galen has always been full of energy and that hasn’t changed. Galen’s natural athletic ability, combined with that energy, has made him one of the most talented athletes I’ve encountered. He does things athletically that you don’t see many kids do. … Galen’s potential as a collegiate track & field athlete is infinite. I truly believe AIC and coach [Leo] Mayo are a perfect fit for Galen.”

Jose Ramirez, a state champ and a fourth-place finisher at the State Open, will be attending UConn, while Mia Hinton committed to ECSU and Kaiya Alexander will be heading south to the University of New Haven.

“Jose is truly one of the most talented athletes I’ve had the privilege of coaching and I’ve coached several outstanding middle distance runners,” Stafford-Kirk said. “Jose has continued the tradition of excellence at the 800- and 400-meter distance, breaking both school records as a junior. He will be challenged at UConn where middle distance is a strength, but Jose has never backed down from any challenge and he isn’t about to start now. He is one of the toughest runners I’ve coached both physically and mentally. More importantly Jose is of impeccable character. He is a leader our younger runners look up to and has set a great example for them to follow. I’m really looking forward to his future as a Husky.”

Rounding out the list of 11 star athletes is Mia Santilli, who will attend SUNY Morrisville after helping the softball team to an 11-9 record last season.