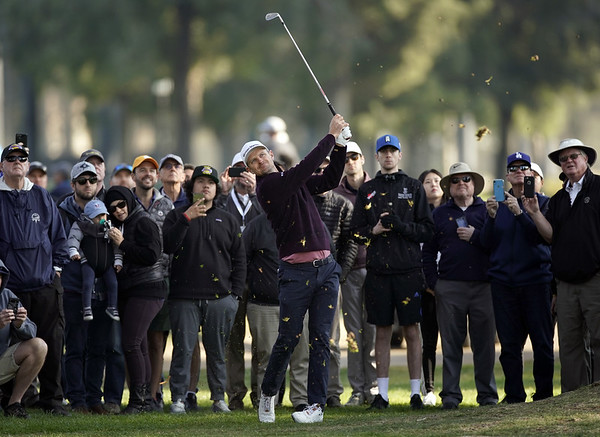 Justin Rose, hits his second shot from the rough on the 13th hole during the second round of the Genesis Invitational golf tournament in Febuary | AP Buy this photo
Published on Monday, 8 June 2020 18:51
Written by DAVID GLOVACH

HARTFORD - The Travelers Championship will have a much different feel at the end of June with no fans being allowed to attend the event due to the coronavirus pandemic, but that still hasn’t stopped a number of top-tier golfers from committing to play in the upcoming tournament.

Rory McIlroy, Brooks Koepka, Justin Thomas, Patrick Reed and Patrick Cantlay - all ranked in the top 10 of the World Golf Rankings - have all committed to play at TPC River Highlands beginning June 25. On Monday, the Travelers Championship added three more golfers ranked in the top 25 to its field with the addition of Justin Rose, Tony Finau and Paul Casey.

“With the addition of Justin, Paul and Tony, we now have 8 of the top 16 in the world ranking, and we expect it to get even better,” Travelers Championship Tournament Director Nathan Grube said in a statement. “Our field continues to grow, and it is going to be an exciting event to watch from home with a number of the world’s best competing at TPC River Highlands.”

Rose has also had plenty of success on the PGA Tour. A former No. 1, Rose is a 10-time winner on Tour, including a win at the 2013 U.S. Open. He also has eight victories on the European Tour, has won in South Africa, Australia and Japan, and was the gold medalist at the 2016 Olympics in Brazil. This will be Rose’s ninth appearance at the Travelers Championship.

Finau doesn’t have the number of victories Rose has - his lone win on Tour was the Puerto Rican Open in 2016 - but has been playing well. In nine PGA Tour starts this season, he has three top-10 finishes, including second place at the Waste Management Phoenix Open. And over his last eight major championships, Finau has finished in the top 10 five times. Finau also participated in the 2018 Ryder Cup and 2019 Presidents Cup. This will be his fifth time playing in the Travelers Championship.

Casey, meanwhile, has won three times on the PGA Tour, including winning the Valspar Championship in consecutive years in 2018 and 2019, and 14 times on the European Tour. Casey’s record at TPC River Highlands has been consistently strong, coming close to winning the event a number of times. He lost in a playoff to Bubba Watson in 2015, tied for 17th in 2016, then tied for fifth place, tied for second and tied for fifth in the past three years. He has represented Europe four times in the Ryder Cup, most recently in 2018.

“Justin, Tony and Paul have won around the world in some of golf’s biggest tournaments, and we’re pleased that they’ll be able to join us for this year’s Travelers Championship,” said Andy Bessette, executive Vice President and Chief Administrative Officer at Travelers, in a statement. “They’ll be a big part of one of the best player fields we’ve ever had.”

The 2020 Travelers Championship will be held June 25–28 at TPC River Highlands in Cromwell. Due to the COVID-19 pandemic, the PGA Tour has announced that the tournament will be a TV-only event, with no spectators permitted on-site. For more information, visit www.TravelersChampionship.com .