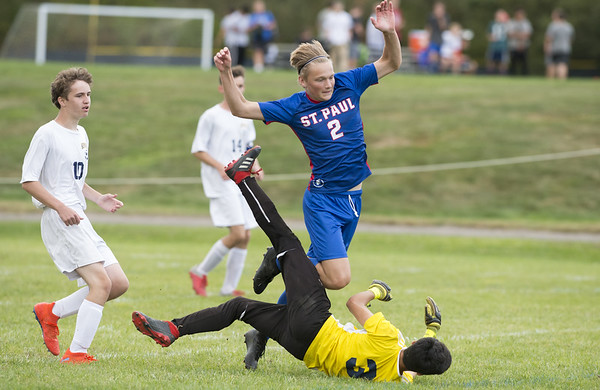 BRISTOL – The St. Paul boys soccer team, under normal circumstances, would have spent Monday preparing for its game against Torrington on Tuesday. Instead, the game has been postponed, along with the Falcons’ other three remaining regular season contests.

The team was notified Monday it would need to quarantine for the next two weeks after a potential exposure to covid-19, and the quarantine would last until Nov. 7, two days after St. Paul’s scheduled regular season finale against Naugatuck.

The postseason format for the NVL is still being finalized, according to Dennehy, but whatever format the league decides on, St. Paul should be able to return to play by then and will be able to provide a final form of competition for its seniors. But due to the required length of quarantine, the regular season is over.

“It's pretty hard,” senior Daniel Bond said. “I kind of figured something like this would happen eventually, but to have it happen at the end of the season kind of sucks.”

Bond and the rest of the Falcons, fresh off of a 3-1 win over Wolcott on Thursday, learned of the news abruptly on Monday.

“They called us out of class yesterday and basically told us we'd been exposed and sent us home,” Bond said.

An email was sent out to members of the program shortly after notifying players and parents about the exposure, stating the exposure was a result of someone within the program testing positive for covid-19.

“Today, we were notified by the Bristol-Burlington Health District (BBHD) that members of the St. Paul Boys Soccer team have been exposed to someone from our program who tested positive for COVID-19,” the email read. “The affected person has been instructed to quarantine for 14 days. Anyone who is considered a ‘close contact,’ including members of the soccer team, have been contacted by the school or local health officials and will be quarantined for precautionary purposes.”

That of course includes the boys soccer team, which will now wait 14 days before it can take the field again for the playoffs before the unique 2020 season comes to an end.

“I would certainly enjoy that,” Bond said of returning to play in the postseason. “I think it would give us one more chance to play as a team. The team would definitely enjoy that.”