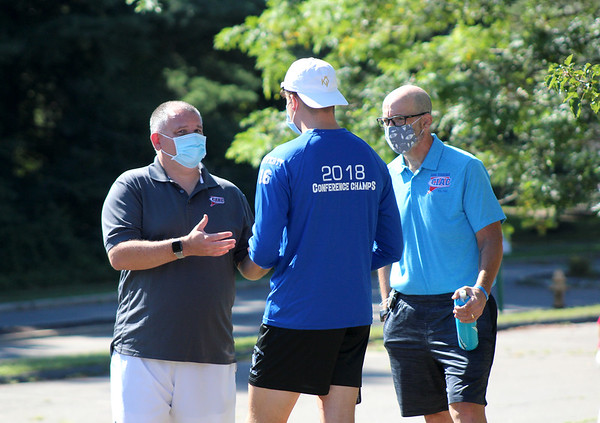 CHESHIRE - The Connecticut Interscholastic Athletic Conference has received updated guidance from the Department of Public Health which approves low and moderate-risk sports for the winter season to begin on Jan. 19 with practices and competition to start as early as Feb. 1, according to reports.

Per the DPH’s updated guidance, sent to the CIAC on Monday afternoon, basketball, ice hockey, swimming and gymnastics have been given the green light to proceed as long as certain mitigating strategies are implemented. But high-risk sports such as wrestling, competitive cheer and competitive dance have been recommended to limit activity to “small group conditioning and non-contact skill building for the duration of the winter season,” per the document sent by DPH.

Indoor track is listed as low or moderate risk by DPH, but the CIAC’s current plan has it listed as postponed, and multi-team events are not allowed this season.

The CIAC announced it had received updated guidance from DPH on Monday afternoon, and its Sports Medicine Committee will review that guidance ahead of Thursday morning’s Board of Control meeting, where the CIAC is expected to vote on a finalized plan for winter sports.

“We thank DPH for its timely work, detailed guidance, and continued collaboration in the safe return to interscholastic sports for CIAC member school athletes,” the CIAC said in Monday’s press release.

The CIAC sent out DPH’s updated guidance to member schools, which included on the cover page that “A final decision on winter sports will be made by the CIAC Board of Control at its Jan. 14 meeting.” Per the CIAC website, that meeting is scheduled to begin at 8:30 a.m.

DPH’s updated guidelines include masks being worn at all times during competition in ice hockey, basketball and indoor track, and whenever possible in swimming and gymnastics. Mask breaks are expected to be implemented, and players and coaches will be socially distanced on the sidelines and benches with masks like they were for girls volleyball, the lone indoor sport that was completing during the fall season.

In the CIAC’s document sent out to member schools after receiving its updated guidance from DPH, scheduling will be fairly universal for the sports that have been greenlit to proceed. Basketball, gymnastics, ice hockey and boys swimming can all begin practices on Jan. 19, with a maximum of 12 regular season contests, and no more than two per week (though teams can schedule three games per week no more than twice during the season), much like girls volleyball and boys and girls soccer in the fall.

State tournament dates, which are tentative and may be pushed back if the season begins later than Feb. 1, are currently listed to run from March 8 to March 21, with teams needing to play a minimum of six games to qualify. Competitive cheer, competitive dance, indoor track and wrestling are all listed as postponed by the CIAC, with indoor track being suggested to do away with multi-team meets by DPH.

All sports are asked to compete within leagues whenever possible to limit travel, much like the fall season, and for sports like gymnastics and boys swimming that must schedule contests outside of their leagues, those competitions must be held virtually.

The winter season was originally scheduled to begin in December, but rising covid cases in Connecticut forced the CIAC to delay plans to Jan. 19, giving schools two weeks after reopening following the holidays before beginning winter sports. No winter sports have been played since the CIAC canceled state tournament play on March 10 of last year.