Mia June of The Aftershock clears the ball from her team's defensive area. | Dan Heary Buy this photo 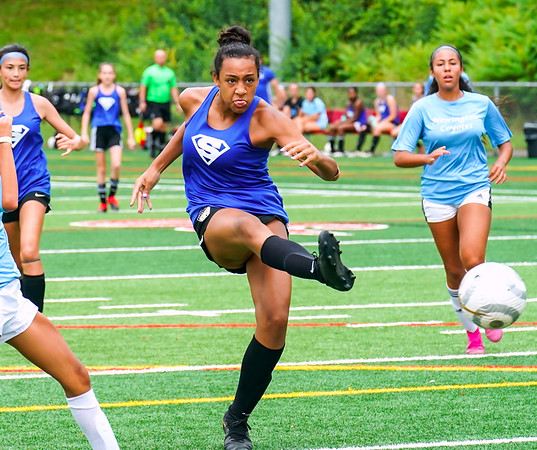 Morgan Jenkins of the Southington Sonics scores one of her three goals against the Newington Coyotes to win a gold medal at the Nutmeg State Games. | Dan Heary Buy this photo

BERLIN - It was gold medal day for girls soccer at the 2021 Nutmeg State Games and locally-based teams took home the top honor in two age groups.

Sage Park hosted the 14 and under and 18 and under gold medal matches, which both ended with large margins of victory. The Southington Sonics started with a 5-1 win over the Newington Coyotes in the under-14 tournament, followed by The Aftershock from Plantsville posting a 6-1 victory over the Pink Ladies of Windsor.

Winning the final game of the tournament completed undefeated runs for the Aftershock and Sonics with the Aftershock winning all three of their games and the Sonics finishing with two wins and two ties.

“I finally thought we put it all together,” Aftershock coach Michael June said. “Our passing was a little crisper than it had been all tournament, our movement off the ball was better and we finished. We hadn’t been finishing in the beginning of the tournament so we finally found the back of the net a few times.”

The under-18 final was the second match of the day for both teams, which started the morning playing their semifinal games. The Aftershock did not seem to be tired at all as it netted three goals in the first half off the feet of Nina Muir, Shianna Reeves and Abby Flanigan. Flanigan’s goal in the first half made the score 2-0 as Mia June sent a free kick left of the goal, but right to the foot of Flanigan who snuck behind the opposing goalkeeper to score.

“I had a couple of girls that weren’t themselves and just looked tired,” June said. “As a whole, I thought they gave everything they had.”

Flanigan and Muir found the back of the net again in the second half along with Mackenzie McCormack as their team dominated possession of the ball and was constantly looking to put shots on goal. This was the Aftershock’s best offensive game of the tournament as they outscored their combined output from their two round-robin games.

“In that last game, I thought Abby Flanigan played phenomenal,” June said. “They’re all good players, but to me, she played outstanding.”

Southington and Newington tied 4-4 on Saturday in the final round-robin day of the under-14 tournament, but the tides shifted greatly Sunday morning. Morgan Jenkins led the Sonics’ offensive attack and scored three goals in the victory, highlighted by a clean header off of a corner kick.

“Morgan is a huge part of our offense,” coach Hugo Vera said. “She always knows where to be and she’s ready to score.”

All five of Southington’s goals came before halftime with Taylor Walwyn opening the proceedings, and Lily Cooper scoring the fifth goal with Jenkins’ three scores in between.

“They played as a group,” Vera said. “We didn’t give them much space today and we scored.”

Arielle Galarza put Newington on the board in the second half as her team did not benefit from seeing their opponent the day before. The team struggled to maintain possession against the Sonics’ aggressive play, but was able to find some rhythm late in the contest.

“I think playing in the heat yesterday probably caught up with us a little bit,” Gallionoto said. “Overall, they kept their heads up even with a couple of quick goals by them.”