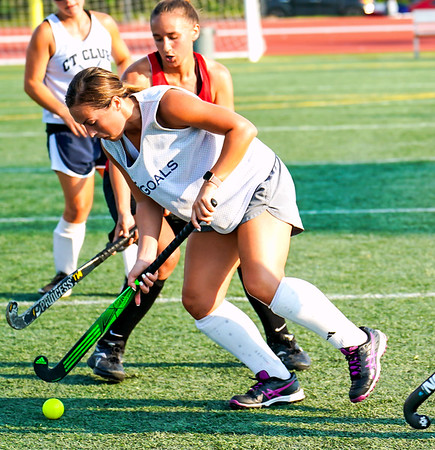 Skillz That Killz won the open division, beating CT Club Field Hockey, 4-2, while Guilford was victorious in the under-18 second division, taking down the Avon Falcons, 5-1.

The open division featured nine teams across two brackets while the under-18 division saw eight teams battle for medals.

Without a goalie all afternoon, the CT Club Field Hockey team nearly won the whole thing as it went 2-0-1 in round robin play before falling in the title game.

“We came out here thinking we were going to go home after the first three games and ended up going to the gold medal game with no goalie,” CT Club’s Cathy Callahan said. “We came out really big in the first game and it was just a lot of fun.”

The silver medalists allowed five goals in four games without a proper goalie, but managed to find the back of the net on the other end with 10 goals scored in total.

“It was great to play together and see what we could actually do,” Callahan said. “Normally we take it easy on each other but we took some hard shots and worked together.”

Based in West Hartford, the squad is composed of women aged 30 and over. The age factor initially led to some nerves going against younger teams, but those we quickly swept aside once game action started.

“We have people from all over the state that play,” Callahan said. “We were coming out here a little nervous, but it was a great time.”

Skill That Killz went a perfect 5-0, while earning a 14 goal differential after its five matches.

In the under-18 second division, Guilford rolled through the competition en route to the gold medal Sunday morning.

Madison Epke led top-seeded Guilford to victory with three goals in the championship game, while Maryn Santa Barbara and Grace Barlage each netted a goal.

“It feels really good,” Madison Epke said. “We have never lost a championship, knock on wood, so far, so it was great to hold that title. We haven’t really played in a while because there’s nothing really in the winter or spring so it was really awesome to get back out here with the team. We love each other so much.”

After four games, Guilford scored 21 goals and allowed just one in a dominating performance for the champions.

“It was exciting,” Guilford coach Wendy Epke said. “The girls were really excited to get the chance to go out and play. Our season starts in six or eight weeks and I think it’s a good tune-up to getting ready. Guilford is the reigning state champions, so they really do want to defend their title.”

Against Avon, Guilford’s offense was sharp around the opposing net as it capitalized on a few in-tight scoring chances.

“Since it is such a small area, no drives, just kind of push shots,” Madison Epke said. “Aiming was the best way to shoot today, not really the big hits, we tried a few.

“Then we did really [well] at crashing the net to get those rebound goals,” Madison Epke said.

Lindsey Arigoni scored the only goal against Guilford all tournament late in the gold-medal game for Avon. Other than that, the champs showed strong defensive structure throughout the contest.

“They did a really good job of staying in front of the player, keeping their sticks low, making good outlet passes,” Wendy Epke said. “They did really well for not playing for a few months, it’s been good.”

Avon finished the tournament with a 3-1 record.

The two-time defending state champion had its first taste of game action for the 2021 season and the group enjoyed the experience overall.

“This is actually really good, we’ve never done this before and this is I think a really good start to our season,” Madison Epke said. “This was our returning varsity that came. We were missing a few but I think we’ll be ready for the start of the season this year.”