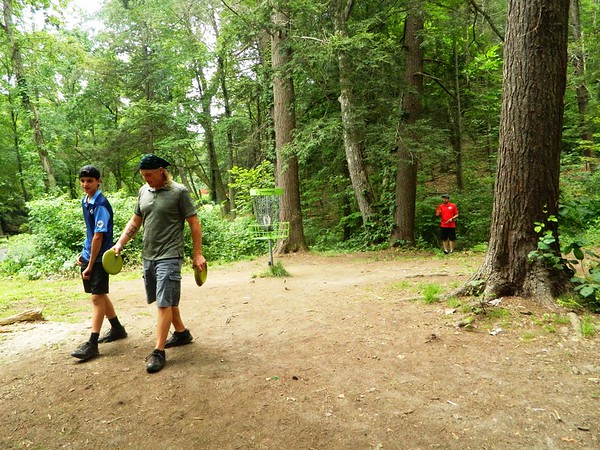 BRISTOL – Over the river and through the woods, a disc golf tournament took place in Rockwell Park all weekend.

Tucked away on the park’s western side behind a baseball field, this course is well-known in the disc golf community. However, area residents who aren’t familiar with it could visit the park ten times without even knowing it was there. Players from across New England gathered on site for the Firefly Hollow Open over the weekend, which ran from Friday morning through Sunday afternoon.

The former Bristol resident was actually part of the team who designed the course, which has been open for about five years now.

The tournament did not take place last year due to the covid-19 pandemic and organizers made sure to take safety precautions in 2021.

“We’re trying to keep everybody socially-distanced with big breaks in between tee times,” Madersky said.

For those who aren’t familiar with disc golf, the sport’s history dates back to the 1980s, but gained recent popularity with the advent of online video sharing. The game is scored almost identically to traditional golf, but instead of clubs and balls, small, Frisbee-like discs are thrown in the air at each hole.

The tournament featured a number of age-protected divisions, along with a junior’s division and a women’s division.

Fairfield resident Bobby Cowperthwait, one of the best disc golfers in the state, discovered the sport as a young adult.

“I started in 2001; I was probably 20 years old,” he recalled. “We saw these baskets at a local park and didn’t actually know what they were.”

Cowperthwait and five of his friends set out to learn how to play and the rest is history.

“We’ve been hooked ever since,” he added.

“It’s by far my favorite course in Connecticut,” he said. “It’s clean and it’s fair.”

Among the weekend’s other competitors were Teresa Wirtemburg, from Stratford. She was one of four women participating this year.

“This course is a beast,” Wirtemburg said. “It’s actually the most technical course in Connecticut. Playing it for three days was challenging, but beautiful.”

Part of the fun of playing disc golf is hiking through the woods to tee off at each hole, according to Wirtemburg. It’s also a lot less expensive than traditional golf, as play is virtually free and a solid set of discs is all you really need.

“Hopefully more women will come out to play this event in the future,” she added. “They were very welcoming and it’s been super fun.”