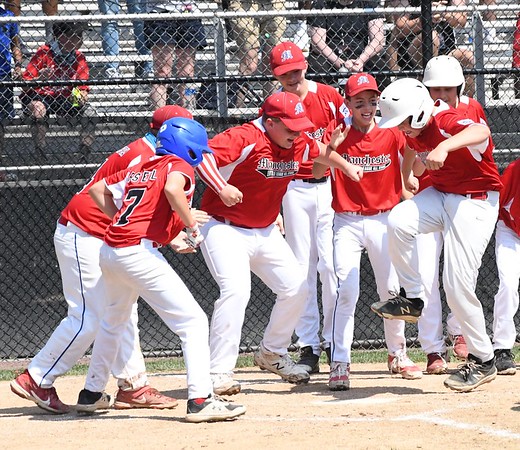 Jacob Budarz stomps on home plate after hitting his go-ahead two-run home run to put Connecticut ahead of Massachusetts. Connecticut held on for the 7-4 win, earning a spot in the New England Regional final Saturday. | Tyler Hetu Buy this photo
Published on Thursday, 12 August 2021 20:16
Written by RYAN AMES

BRISTOL – Jacob Budarz led Manchester Little League past Massachusetts, 7-4, in the semifinal of the New England Region bracket at the Little League East Region on Thursday at Breen Field.

Budarz belted a two-run homerun in the fourth and finished with three RBIs to send Connecticut to this summer's Little League World Series in Williamsport, Pa.

Budarz's blast put Connecticut ahead 4-3 after it trailed for the first three innings.

Connecticut also used Budarz on the bump and No. 14 was sharp, allowing just one hit for three runs in 3 1/3 innings. Budarz led all pitchers with eight strikeouts, before Arlen Peyman closed out the contest with five strikeouts.

Peabody West Masachusetts was paced by Jimmy DiCarlo, who posted two hits and pitched well in the defeat, surrendering two runs on four hits while striking out six.

Massachusetts put three on the board in the first inning, forcing Budarz to throw 39 pitches.

Cullen Pasterick hit a RBI sacrifice fly to left field for the first run, before Brendan Kobierski punched a one-run single through to left to make it 2-0. A Budarz wild pitch pushed Massachusetts' lead to 3-0.

Connecticut let a great opportunity get away in the top of the second, putting two runners on base with no outs, but leaving with nothing to show for it.

Paul Virdokian walked and Griffin Czarnota dropped a single to center to start the inning, but two strikeouts from DiCarlo and an infield fielder's choice, that was reviewed, got Massachusetts off the hook.

Connecticut didn't let the opportunity pass in the third, scoring twice to cut its deficit to 3-2.

Eli Bucko hit a liner to right field and the Massachusetts outfielder couldn't hang on, causing Jacob Budarz to score. Budarz rocked a triple to right to record Connecticut's first hit of the frame.

Connecticut poured in two runs in the fourth and three more in the sixth to give itself a five-run lead late in the game.

Five hits in the sixth scored three runs, with RBI singles from Budarz and Virdokian and a one-run double off the fence from Ryan Gorman making up Connecticut's big inning.

Massachusetts got one back in the bottom of the sixth on an RBI triple from Jimmy DiCarlo, but it wasn't enough as Connecticut held on.

Connecticut cracked 12 hits while Massachusetts concluded with four. Each team picked up errors as well.

Budarz day ended with three hits, runs and RBIs, each. All were game-high.

The loss puts Massachusetts in the loser's bracket final and it'll face New Hampshire on Friday at 1 p.m.

Connecticut will play the winner of that game on Saturday at noon.