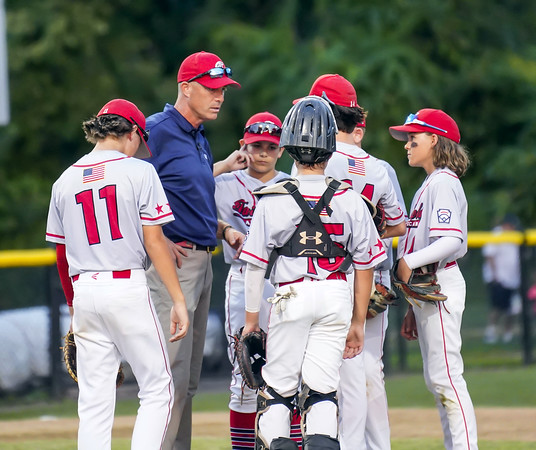 BRISTOL – In front of a packed house at the Giamatti Complex in Bristol on Wednesday night, two of the strongest leagues in the East Region battled for a ticket to the Metro Region Championship on Friday. Toms River East of New Jersey continued their efforts to a second-straight trip to Williamsport taking down Fairfield American of Connecticut by a 3-1 final.

New Jersey starting pitcher Logan Macchia took on most of the load in Wednesday’s semifinal nearly going the distance on the mound. He pitched five and two thirds innings allowing one run on five hits with five strikeouts. Macchia also created havoc at the plate when he opened up the scoring in the first inning with a two-run homer to right field.

Fairfield American first baseman Drew Kane responded in the third inning with a four-bagger of his own. His solo shot ended up being Connecticut’s only run of the evening.

Connecticut nearly broke across the inning prior with the bases loaded and no outs. Macchia was able to escape the jam unscathed with two strikeouts to his credit in the frame.

New Jersey manager Mike Mendes explained that his side never wavered on Macchia even after working himself into that tough spot in the second inning.

“He wasn’t coming out of the game,” Mendes said. “We knew we were riding with him for five innings. I’ve seen him step up before with the bases loaded, no outs and that’s what we said to him again when we were screaming from the dugout.”

Macchia had as much trust in himself and his defense as the coaches had in him in that critical spot as well.

“Just throw strikes and make sure they don’t put it in play,” said Macchia on his mindset in that inning. “If they do [hit the ball] I’ve got defense behind me.”

“I’m not taking anything away from Toms River, we just played tight,” Lawlor said. “We made some errors that we don’t usually make. Our pitcher was great. He made one bad pitch that he left down the middle of the plate, but he battled. He was awesome.”

Fairfield American was in pursuit of their fourth trip to Williamsport over the last 12 years, but Lawlor said not reaching that goal won’t be the toughest pill to swallow for his team.

“This is the best summer vacation ever when you coach little league baseball with kids like that and with families like that,” Lawlor said. “This hurts. Not because we want to go to the Little League World Series, but because it’s over. We’re not going to get to coach this group of kids again. That’s the part that’s tough.”

New Jersey will now look ahead to the Metro Region Championship and a rematch with Massapequa Coast Little League of New York on Friday at 7 p.m. on ESPN. New York took down New Jersey in the opening game of the Metro bracket on Saturday in extra innings.

If New York wins the winner-take-all championship on Friday, they will have tied New Jersey for all-time appearances in the Little League World Series with 20.