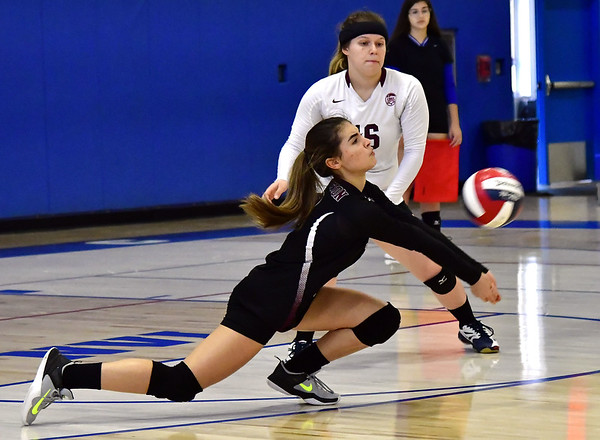 Innovation's Victoria Merced, front, attempts to save a ball during a match earlier this season | Mike Orazzi | Staff Buy this photo
Published on Wednesday, 7 November 2018 20:40
Written by SHELBY IAVA

NEW BRITAIN - Despite falling in the second round of the Class M state tournament, the Innovation girls volleyball team had plenty of success on the court this season.

“This match really came down to those important points,” Ravens head coach Matt Lance said. “In the second set, we played the points well, but not in the third. Aside from the beginning of the fourth set, that's the best volleyball I’ve ever seen my team play. I am extremely proud of them.”

Senior Morgan Sartor led the team with 26 digs, which was a new personal record. Aaliyah Walker also recorded eight kills and six blockd, breaking an Innovation school record for the most solo blocks in a single match.

No. 4 Coventry 3, No. 13 Goodwin Tech 0: The Gladiators fell in the second round of the Class S tournament Wednesday afternoon. Goodwin Tech was swept in set scores of 25-7, 25-9 and 25-4 by the defending Class S champions, ending its season with a 13-10 record.

“As a first-year coach I was proud of [the players],” Goodwin Tech head coach Cristina Stisser said. “Making it to the state tournament and making it past the first round, the school has only done that four or five times so they should be proud. It didn’t end the way they wanted, they should hold their heads up.”