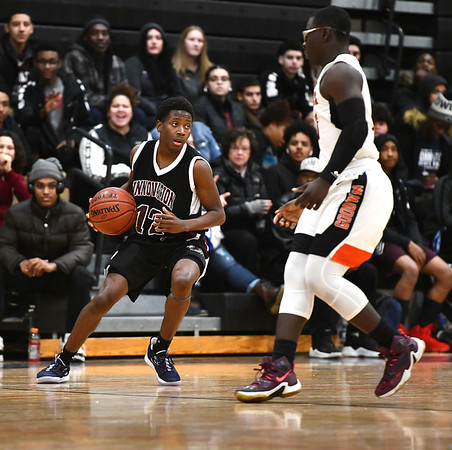 NEW BRITAIN ŌĆō It didnŌĆÖt come easy, but the Innovation boys basketball team opened its season with a gritty win on the road.

The defending state champs took the short trip to Goodwin Tech and labored through a rough shooting night, but held off the Gladiators in the final minute to secure a 50-49 victory.

The Ravens started off hot from deep to take an early eight-point lead, then made just one of its next seven 3-point attempts while Goodwin Tech battled back, tying the game with just over five minutes left in the game before LJ Hazelwood sank five free throws to pull away and make a buzzer-beating 3-pointer by Goodwin TechŌĆÖs Luis Aguiar a moot point.

ŌĆ£This definitely had a first game kind of vibe,ŌĆØ Hazelwood said after leading the team with 17 points.

AguiarŌĆÖs contested three as the final horn sounded was one of the toughest made shots of the night by either side, but after it went through the net, the Gladiators were forced to relive the easier chances that they couldnŌĆÖt convert earlier in the season-opening contest.

ŌĆ£You canŌĆÖt wait until the end of the game,ŌĆØ Goodwin Tech head coach Reuben Charles said. ŌĆ£It starts at the beginning, when we were missing easy layups and throwing the ball away in transition. Those are the things we look back at.ŌĆØ

Innovation capitalized on the GladiatorsŌĆÖ early miscues and built an 11-4 lead in the first, when Michael Blackman sandwiched a pair of 3-pointers around a three from Gabe Matias.

Goodwin Tech battled right back when Aguiar made one of two free throws, and after the miss on the second attempt, the Gladiators pulled down the offensive board and kicked it outside to Damian Garcia, who nailed a triple to cut the deficit to three.

The Ravens responded with more sharp shooting from deep courtesy of Matias, who knocked down a triple to open up an 18-10 advantage, with Innovation knocking down four of its first five 3-point attempts.

Still, Goodwin Tech closed the gap to 21-17 in the final minute of the quarter thanks to back-to-back baskets from Aguiar and Jesse Tandoh.

Trailing by seven late in the second quarter, the Gladiators cut it to two with less than 90 seconds left in the half thanks to five straight points from Aguiar, while InnovationŌĆÖs offense suddenly stalled.

After lighting up the scoreboard from long range to start the first, the Ravens managed just two field goals in the second quarter to maintain a four-point lead heading into the locker room.

ŌĆ£ItŌĆÖs easy to play well and unselfish when weŌĆÖre hitting shots,ŌĆØ Innovation head coach Matt Lance said. ŌĆ£Once we missed one or two, we started to panic a little bit and go one-on-one, and we became really easy to defend.ŌĆØ

Looking to reignite a suddenly dormant offense, Innovation got two straight baskets from Clinton Allen to push its lead back to seven in the early minutes of the third quarter.

But once again, Goodwin Tech had an answer. Aguiar knocked down a short-range jumper before Joe Santiago sank a deep three to cut the lead down to two midway through the quarter.

The Gladiators pulled to within one with 1:20 left in the third thanks to a layup from Nef Murray after an Innovation turnover, but the Ravens pulled back ahead by four with a triple from Matias on the ensuing possession, a lead they held heading into the fourth.

Goodwin Tech opened the fourth with a fadeaway bucket form Garcia to pull within two, then tied it on the next possession on a running layup from Cartagena.

It took its first lead of the night when Aguiar followed up on his own miss and banked home a layup to put the Gladiators ahead 40-38 with 5:18 to go.

ŌĆ£It was the first game and everyone was kind of jittery, but they battled back and kept fighting,ŌĆØ Charles said. ŌĆ£ThatŌĆÖs what you want to see.ŌĆØ

The back and forth battle continued after Hazelwood tied it with a pair of free throws, then Blackman picked off a pass and drove it to the other end, sinking a tough layup that bounced off the rim three times before dropping in while drawing the foul. His free throw completed the 3-point play and put Innovation back in front by three with 4:30 left and finally drew a rowdy reaction from the Innovation bench.

Aguiar pulled Goodwin Tech within one with a fadeaway jumper with 1:30 to go, but Hazelwood sank three of four free throws in the final minute to stretch the Ravens lead back to four with 20 seconds left on the clock.

The Gladiators missed two free throws in the final minute, which made AguiarŌĆÖs triple on the final shot of the night anticlimactic.

ŌĆ£We tried our best,ŌĆØ Aguiar said. ŌĆ£We played hard, and it was a tough game. We made too many mistakes, but weŌĆÖre going to learn from them and work harder.ŌĆØ