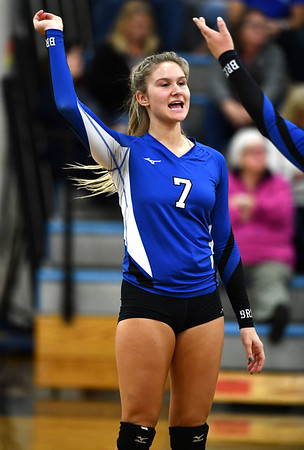 BRISTOL - The Bristol Eastern girls volleyball team is now on a three-game winning streak to start the 2020 season and have only dropped one set after its 3-0 win over the Plainville. The Lancers never allowed the Blue Devils to score more than 14 points in any set as Zoe Lowe continued her strong season with five kills and 15 aces.

Eastern saw strong contributions from across its roster including seven kills from Sage Scarritt, six kills from Emma Rodjenski, one dig and two assists from Alyssa Adorno and three assists and two aces.

The Lancers have a tough home match up next on their schedule when they face Southington on Thursday and the Blue Devils will look for their first win when they take on Bristol Central the same day.

Newington 3, Rocky Hill 0: Newington breezed to its first win of the season with a sweep of Rocky Hill 25-14, 25-23, 25-20 to make its record 1-2 so far this year. Senior Madison Massaro-Cook posted 10 kills and four aces in the win to lead her team while junior Hannah DeMarco notched 14 assists and senior Emilia Dugas finished with six kills and four aces.

Newington’s will look to stay on the winning side Thursday when it hosts Bulkeley.

Innovation 4, Wilcox Tech 2: The Innovation boys soccer team improved its record to 2-0 on the season with an early onslaught of goals to beat Wilcox Tech 4-2.

All four of the Ravens goals came in the first half led by two from Lazgin Mnala Fadli and then one each from Waseem Alisifari and Dawood Alisifari. Waseem also assisted on two of his team’s goals and Malachi Morales contributed one assist as well.

Both teams took 13 shots in the contest but Innovation proved to be the more accurate team. Wilcox Tech was able to cut the Falcons lead in half by the end of the match with goals from Alex Gazilanes and Kevin Colvert, but Innovation’s early offense was too much.

Alex Zazula was an effective force on defense for the Falcons, who kept the ball out of their defensive third for much of the match. Zazula was anchored by goalkeeper Arnaz Falcon who finished with nine saves.

Next up for Innovation is a match on the road against Goodwin Tech.

Goodwin Tech will look to start the year on a winning streak Thursday when it faces Innovation.