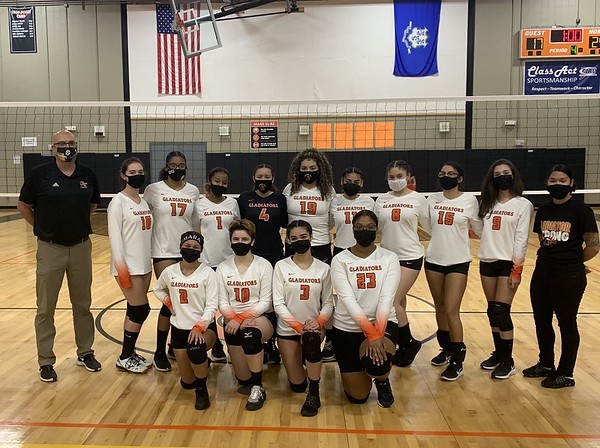 NEW BRITAIN – The road leading to the end of the 2020 season for the Goodwin Tech girls volleyball was almost recognizable compared to that of 2019, but in the end, the outcome remained the same.

Sure, the season itself was seemingly in peril until just weeks before the season due to covid-19 concerns, and the regionalized scheduling that helped save the season forced the Gladiators to leave the CTC and join the CRAL, but that didn’t stop Goodwin Tech from capturing its second straight conference championship. Only this year, the conference name that will be stitched on the championship banner will have a different name.

“It was a blessing to be able to pay this year and win a championship,” senior Nathalie Delarosa said. “I’m very grateful. It was really cool that we were able to have a season even though it was very, very different. I feel like it wasn’t to be taken for granted. We couldn’t be upset that we couldn’t play as many games as normal. It was still good.”

The season was shrunk to 12 regular season games, which seemed like more than the initial outlook, back when the Connecticut Interscholastic Athletic Conference was working with the Department of Public Health to develop enough mitigating strategies for covid that would lower the risk of an indoor sport like volleyball, and allow it to be played. At first, it seemed like DPH would hold firm on the recommendation that the sport be played outdoors in 2020, which brought up a number of problems for city schools like Goodwin Tech and many others, who might not have access to outdoor courts.

“I just felt really disappointed, but at the same time, I understood because of what’s going on in the world,” Delarosa said. “People are losing their lives. It was understandable, but very upsetting.”

Just when the CIAC discussed the difficulty of putting such a season together, DPH came to the agreement that if student-athletes wore masks during competition and if teams didn’t switch benches in between sets, the season would be good to go.

Just like that, the Gladiators were given their chance to repeat as conference champions, though not in the same conference. Goodwin Tech, now a part of the CRAL to limit travel, were given a regular season slate that included a load of new opponents, though there was one familiar squad that joined them in their temporary move to the CRAL: Prince Tech, the team the Gladiators beat in a five-set thriller in the 2019 CTC Tournament championship match.

“It gave us experience playing new teams which I think helped us in the finals,” senior Tabetha Trammell said. “We both had a lot of time to improve ourselves, and we only played [Prince Tech] once during the season so we didn’t really know how they were going to play. It was just about who wanted it more.”

That lone matchup against Prince Tech in the regular season resulted in another dramatic 3-2 win for Goodwin Tech, but as the conference tournament arrived, the season was once again at risk due to rising covid cases throughout the state, and a number of schools, including multiple ones within the CRAL, were being forced to quarantine and move to remote learning out of precaution. With the conference playoffs being the only form of a postseason for fall sports this year, the chance to play for another championship was once again hanging in the balance.

“We were on edge,” Trammell said. “We didn’t know if the season would get canceled. When we moved into the championship, we were just hoping it wouldn’t get canceled.”

Fortunately for the Gladiators, the conference tournament was able to happen, and a win over Weaver set up another conference final appearance. All that was left was a wait to see who the team’s opponent would be, with Wilcox Tech facing Prince Tech in the other semifinals match.

“When we found out Prince was playing Wilcox, a lot of us wanted to play Prince,” Trammell said. “Just that feeling that we played them last year. Being the last game, we wanted to finish the year strong.”

With no state tournament awaiting afterward, the conference tournament final was the last stop for both teams, no matter what. It had been a shortened season that was anything but normal, but once the two teams took the court, the energy seemed to exceed the 2019 classic that took place at St. Joseph University.

“Playing the same team we played last year in the championship, I felt like they wanted revenge,” Delarosa said, after being a key contributor in last year’s fifth set clincher. “I feel like it was good competition. If anything, I felt like it was more competition than last year. It’s my senior year and I don’t have another year. This was the only championship that was happening. I felt like we had to win, or it was done.”

The 3-1 win, which made Goodwin Tech back-to-back champs, had an even more special meaning given the uncertainty that the team would even have a chance to repeat.

The Gladiators were guided to their second straight championship by head coach Joe Granja, who helped the team navigate an unfamiliar regular season slate and still get his group to the same destination: a conference tournament trophy.

“I just want to thank our coach,” Delarosa said. “He’s helped me through so much in high school and there is no championship without him. He fought to make sure this season would be as successful as possible.”