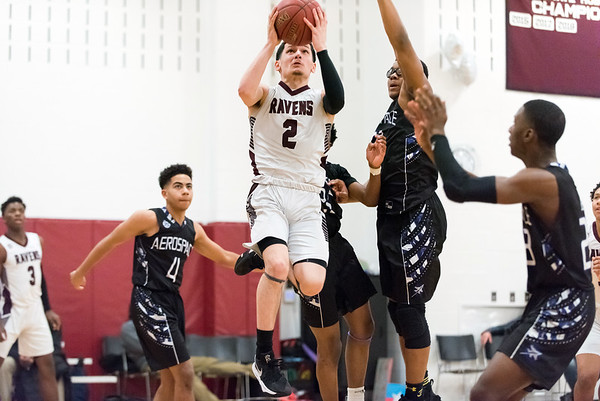 And as if right on cue, the junior guard did so once again Monday night.

Gonzalez hits four key third-quarter 3-pointers to help the Ravens beat Woodland in the first round of the Division V state tournament, giving the program its first state tournament win in the process.

Gonzalez finished with a game-high 21 points, proving he can be a tough offensive threat for opposing teams to deal with.

But even when Gonzalez’s shots aren’t falling, Lance can rely on him to find other ways to contribute to the game. Against Woodland, Gonzalez made plenty of impact on defense, finishing with four steals.

“I think at times, his ability to impact the games is sometimes forgotten because he is such a good shooter,” Lance said. “He has done a great job of finding ways to help the team in addition to hitting shots. That’s evident in games he has facilitated the offense of teammates or when he leads the team in steals. He has become a complete player, which is a direct result of all the hard work he has put in on his own.”

Initially from Two Rivers High School, Gonzalez came over to Innovation when the two schools merged when Two Rivers shut down. The combination of the two teams at the beginning of the season left many people skeptical on how the season would go and whether the sets of player would be able to co-exist. But the merge has done nothing but improve the Ravens program.

“I think the combination from both schools brought the talent level way high,” Gonzalez said. “The toughness has just improved and people didn’t think we would be this good but look where we are now, we made it.”

This season has certainly been a year of firsts for Innovation,

After the Ravens qualified for the state tournament for the first time since the program began (initially as Med-Ed Prep) in 2015, they continued to achieve milestones. Innovation claimed its first CRAL tournament crown earlier this season before beating Woodland Monday night.

“It helps with the combination of Two Rivers and us,” Lance said. “Obviously, you just have more basketball players like Gonzalez. People were worried about the chemistry and if these kids were going to be able to click together. But all these kids care about it is winning.”

Innovation will next play sixth-seed Parish Hill (15-5) in the second round of the Division V state tournament tonight at 7 p.m. This will be the fourth meeting of the season between the two schools with the Ravens winning the first three, including the CRAL title game.

And after the season its had so far, Innovation is confident heading into this matchup.

“Keep watching the Ravens, we’re ready to beat anybody,” Gonzalez said. “We’re going to go all the way.”