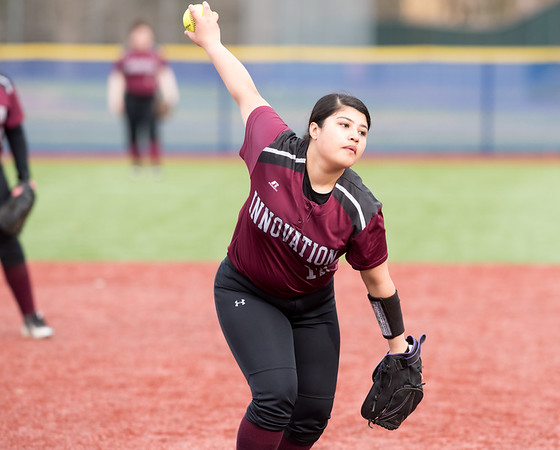 NEW BRITAIN - Coming off of a year in 2017 that saw the Innovation softball team go to the second round of the Class S playoffs, there were some questions surrounding the Ravens this season.

The team got a new head coach in Robert Polselli after Innovation merged with Two Rivers before the school year began. That meant, there were also new, veterans players who had yet to share a field together. It left Polselli wondering how the Ravens would jell this season.

But thanks to a largely returning roster, led by junior Isabella Orejuela, those questions have been largely been resolved. The Ravens are already out to a 5-3 record - just three wins from qualifying for the postseason - with three of those wins by 20 runs or more, thanks in large part to Orejuela’s performance from the pitching circle.

It’s obvious from just observing the team that Orejuela is the Ravens leader. Every player, especially the younger ones, gravitates to her before, during and after games. After an extra inning win against Plainville Tuesday, the Ravens celebrated by collapsing on the pitcher’s circle, with Orejuela in the center.

One thing the Ravens have yet to overcome is costly mistakes in the field, something Orejuela shared that frustrates her from time to time. The Ravens had three errors Tuesday against Plainville, but narrowly escaped with a 7-6 win in extra innings.

“When we lose these close games, it comes down to a play here and there,” assistant coach Margaret Fallon said. “When Izzy is hitting her spots, but the fielders aren’t backing her up, it’s definitely frustrating.”

Orejuela knows she sets the tone for the Ravens from the circle and said she wants her team to do a better job of coming together and playing as a team.

“[Tuesday], we finished. We fought all the way through,” Orejuela said. “We start some games rough and sometimes we give up. But [Tuesday], I didn’t give up and neither did the team and it showed.”

On the field, the junior performed well against Plainville.

From the pitching circle, she pitched a complete game, with just three of the six runs she gave up being earned. She also had nine strikeouts, five of which came with runners on base and killed potential rallies. She also had a strong game from the plate, knocking two base hits and driving in two runs to help herself out.

“I’m proud of Izzy,” Fallon said. “The team rallied around her and we finished the way we wanted to because of it.”

Innovation still has 12 games left on the schedule, but its three-game win streak, during which the Ravens outscored opponents 55-20, shows that they’re already in playoff form.

If Innovation wants to get back to the playoffs, they’ll have to lean on the shoulders of Orejuela.

So far, it looks as though she’s up to the challenge.