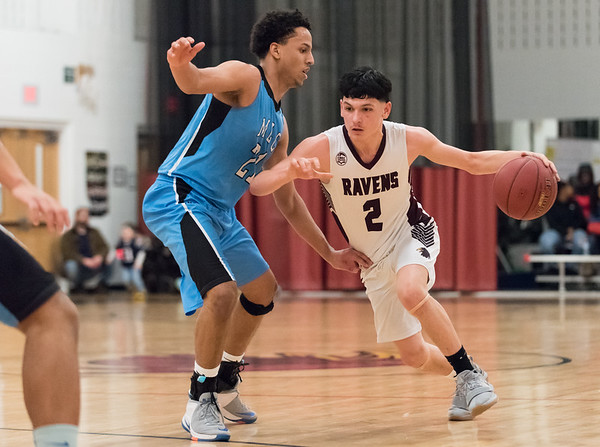 NEW BRITAIN -The Innovation boys basketball team has been mostly free of disappointment so far this season - mostly.

Entering Friday night’s game against Suffield with a 17-1 record and a 10-game winning streak, the Ravens found themselves in position to record another win, caught in a tie game with the Wildcats with less than two seconds on the clock.

From beneath its own hoop, Suffield heaved a full-court pass to the other end of the court, resulting in a game-winning layup with 1.6 seconds left to deal Innovation a brutal 53-51 loss at home.

The final basket in the waning seconds of the game was just a symptom of an overall lackluster performance from the Ravens, who missed numerous opportunities to put the game away.

The Wildcats exposed Innovation with Jared Lobo, who dropped 21 points while dominating on the glass.

“Lobo is a heck of a player for them,” Lance said. “This is one of the few times we’ve been outrebounded this season.”

The game was tied at halftime and remained tight until the final possession, as the teams battled through the final 16 minutes, as Lobo and Innovation’s LJ Hazelwood traded buckets in the close contest. Hazelwood finished with 17 points, while grabbing 14 rebounds to complete a double-double in the losing effort.

“I’m really proud with LJ’s effort tonight,” Lance said. “He had a phenomenal game for us.”

Normally sound on defense, the Ravens allowed the Wildcats to score over 15 points in each of the next three quarters, which was too much for Hazelwood and the offense to overcome.

“We hang our hats on defense and we didn’t do a good job of playing how we’re capable of playing,” Lance said. “We talked after the game and at this point in the season we have to get better from it. We have to have five guys on the floor who are willing to do all the small things right.”

The loss stings right now for Innovation, but Lance and his group will try to look at the big picture, and focus on closing the regular season on Tuesday a high note before the CRAL Tournament.

“I think back towards the end of last season and Goodwin Tech absolutely ran us out of the gym, but we responded and regrouped,” Lance said. “We have to get back to the things that make us a good basketball team. If this is the group I think it is, we’ll get back into the gym tomorrow and have a good practice.”