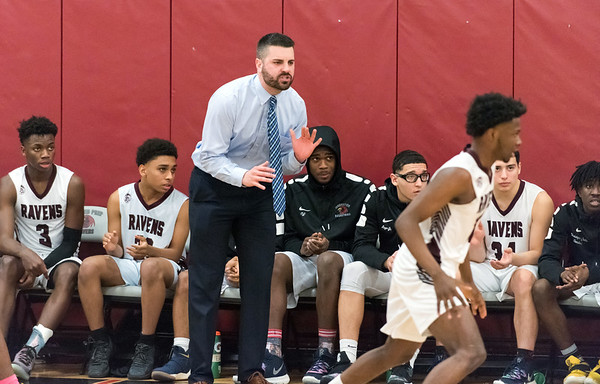 When he took over InnovationтАЩs boys basketball program in 2015, Lance was tasked with building a team that had yet to win a game by re-tooling its infrastructure.

Four years later, itтАЩs safe to say the developing process worked. And itтАЩs arguable to assert the project is near completion as the No. 1-seeded Ravens (21-2) head into a Division V state tournament quarterfinal game against No. 9 HMTCA (15-7) at 6 p.m. tonight at Goodwin Tech High School.

тАЬThe first few years, we were struggling, not gonna lie,тАЭ said junior LJ Hazelwood, who missed half of his freshman season with a broken bone in his foot and half of his sophomore campaign with a torn meniscus. тАЬI had to do a lot of watching since I was hurt. IтАЩve been able to watch my teammates and the chemistry just grow between all of us. As that got stronger, our record got better, and weтАЩve been starting to prove how good we are.тАЭ

In the programтАЩs first season (2013-14), the Ravens played a JV schedule, and in their first varsity campaign the following year, they went 0-15.

In LanceтАЩs first season (2015-16), it was only a 2-18 effort as the Ravens continued to develop a roster that had a lack of veteran experience, all while implementing brand-new offensive and defensive systems as the players got more comfortable with the tutelage of the head coach and assistant Phil Smith.

тАЬIтАЩm competitive. I donтАЩt like to lose. None of my kids like to lose,тАЭ Lance said. тАЬBut I had to constantly tell myself youтАЩre working with freshmen and sophomores who are going against seniors. ItтАЩs going to happen. We were improving. Even if we only went from zero wins to two wins, we were getting better. Even with two wins or six wins, our expectations and demands were the same as what they are now. It just took us a while to meet what our program expectations are, which is understandable.тАЭ

Lance had a strong image of what his program could become, and he credits his players for believing in that vision, even when at times it was tough to see.

тАЬItтАЩs hard to do what they did, and thatтАЩs to buy in to doing things even when we werenтАЩt winning,тАЭ Lance said. тАЬPart of it was you have guys that get older. We were playing a lot of freshmen and sophomores on varsity right away. YouтАЩre gonna take your bumps and bruises there, but I think itтАЩs buying in to realizing things need to be done a certain way even when youтАЩre not winning.тАЭ

Last season, the Ravens won 16 games, going 12-8 in the regular season to earn an 11 seed in the Division V tournament. Their turnaround began with a six-game winning streak from Jan. 26-Feb. 6 that Innovation senior Lenny Okonya called a true тАЬturning point.тАЭ

They then won the programтАЩs first conference tourney title and first state postseason game at home, and then pulled out a four-point upset on the road before falling 57-55 to eventual state champion Cromwell in the quarterfinals - proving to be the PanthersтАЩ toughest test on the way to a title run, as they won their other three games by 17.7 points apiece.

The RavensтАЩ balanced offense and deadly defense won their 12 conference games this season by 35.3 points per game and their six non-conference contests by 24.7 points. Their only losses came in a 24-point defeat to one of this yearтАЩs Division II semifinalists, Manchester (19-4), and a two-point loss at the buzzer to Suffield (12-10).

But because Innovation plays in such a small conference and is in just its sixth year, the program is still mostly unknown across the state. That leaves the Ravens with a chip-on-their-shoulder approach, having to battle for recognition.

тАЬWe knew we were capable of this,тАЭ Okonya said. тАЬWeтАЩve known weтАЩve had this in us, and itтАЩs making us hungrier because weтАЩre the No. 1 seed. We know weтАЩre supposed to win every game so it makes us hungry. We still have to prove things because not a lot of people still know who we are. We still have to fight for our name every day.тАЭ

тАЬItтАЩs a respect type of thing, you know?тАЭ Hazelwood said. тАЬWeтАЩre trying to earn everybodyтАЩs respect. We want everybody to know that Innovation is a school out here. WeтАЩre a good basketball program. We can compete. If we donтАЩt win then we havenтАЩt accomplished our goal.тАЭ