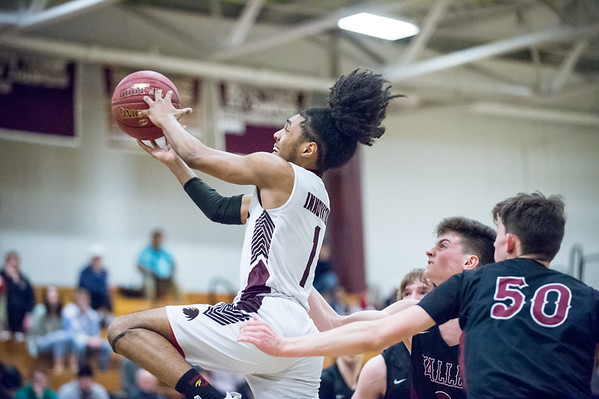 The top-seeded Innovation boys basketball team is all set to take on No. 3 Old Lyme in the Division V state title game Sunday morning at Mohegan Sun Arena.

Here are three things the Ravens must do to win the program’s first ever state championship:

PLAY THEIR STYLE OF DEFENSE

Dance with the girl that brought you, right? Innovation head coach Matt Lance has built his program with a relentless, pressurized, in-your-face defense. There should be no reason to expect any sort of drastic change in the Ravens’ game plan on Sunday against Old Lyme.

If Innovation wins, the blueprint starts with its quick, pesky guards being aggressive on the ball, and it ends with “The Twin Towers” of 6-foot-6 Lenny Okonya and 6-foot-4 LJ Hazelwood cleaning things up on the back end around the rim. Great defense is typically easier to rely on than great offense. That’s also Lance’s approach. As Ravens fans saw in the semifinals against Valley Regional, many factors can affect a team on offense, and a bad shooting night can be contagious. It will be a brighter stage in a bigger arena, so there could be some poor shooting on both sides. That should give Innovation a leg up.

“We do have an advantage because some teams that are offensive-minded might have trouble in different scenarios or different gyms like Mohegan,” Okonya said. “But defense travels. Our defense doesn’t change from where we play. At the end of the day, if we can get stops and get on the floor running it’ll be big.”

There are going to be nerves. It’s the state championship game. Those are expected and almost hoped for. Don’t be surprised if you see 10 combined turnovers in the first three minutes of the game. But after that initial wave passes, once what is sure to be a hectic-opening pace slows down, Innovation needs to be the more composed squad.

The Ravens cannot afford to rush their offense like they did in the second round against Coventry when they committed 21 turnovers and against Valley Regional in the semifinals when they gave it away 18 times. Stay calm and slow things down. Yes, Innovation can easily get the ball right back in a hurry. They forced 24 turnovers against Coventry and 15 against Valley Regional. But you can’t rely on that in a championship game. Too many giveaways will probably lead to a title game loss on Sunday. After the initial nerves of the opening minutes wear off, whoever remains calm under pressure will win, even if not all the players believe nervousness will come into play.

“After tip-off, nerves should be gone,” Ravens point guard Carlos Gonzalez said. “This is what we set out to play for. This is what we came to do. At Mohegan Sun, it’s really a game of runs and who wants it more. If you give the other team a minute [of a big run], they might jump on you so there’s no time for nerves.”

At least three times on Wednesday night, during the Division V semifinals Lance shouted “Crash the glass, Lenny!” to his senior, Okonya. Lance was referencing the offensive glass, where Innovation has made its money this season in getting a ton of putback opportunities. But even more importantly, the Ravens can’t afford to let Old Lyme do what HMTCA did to Innovation in the quarterfinals when the two teams meet for the state championship Sunday morning.

Too often, the Phoenix were able to outhustle and outmuscle Innovation for offensive rebounds and loose balls. That kept HMTCA in the game for much longer than what the final score suggested, as it made a couple of runs in the second half by cashing in on second chances.

“I’m huge on rebounding,” Lance said. “Most games we have an advantage in size inside, and [Wednesday] night there were times when we were super aggressive on the offensive glass. On the defensive glass, we were sometimes passive. If we can limit teams to one shot and we can get offensive putbacks, that’s obviously gonna help us put more points on the board rather than having to put up tougher shots.” It will be interesting to see how that plays out.