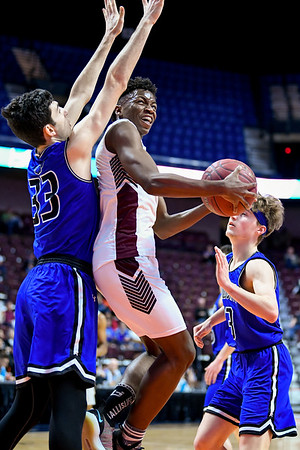 The embrace between Gonzalez and Alonso represented more than a pair of graduating upperclassmen finishing their high school careers with a state trophy. The duo’s locking arms illustrated a connection that materialized two years prior, one that changed the trajectory of the Ravens’ basketball program in an instant.

Alonso had just finished his sophomore season when Innovation began its merger with Two Rivers High School in Hartford in 2017, one that didn’t seem to have any immediate impact on a Ravens’ basketball team that went 2-33 over its first two years of existence. But the merge brought more than just crowded hallways to Innovation’s building in New Britain. It brought Gonzalez, a gifted sophomore guard and fellow backcourt partner in Lester Emanuel, who poured in a game-high 15 points in the Ravens’ 62-41 championship victory over Old Lyme on Sunday.

“When we merged, we saw a lot of potential and a lot of talent,” Emanuel said. “What [Innovation] was lacking, we had, and vice versa. We saw last year that we could do things that people might not expect.”

Last year included a 16-9 season and a heartbreaking loss to eventual Division V champion Cromwell in the state quarterfinals. For a program that was just five years old, the Ravens had a successful formula in place thanks to their new friends from Two Rivers.

“It gave them belief that they were able to compete with teams at that level,” Innovation head coach Matt Lance said about the defeat at Cromwell. “It also showed them what it took.”

Prior to the merger, Innovation only knew that whatever it took to win a title, they didn’t have it. The early years for the new program were tough for everyone involved, as losses piled up high enough to hide any progress the players might be making in terms of establishing a winning culture.

“Everybody would come in and expect to beat us by 30,” Alonso said. “It was bad. But we stuck together because we knew we had a bigger plan, and it would just take a little longer.”

The plan reached completion as Lance passed the team’s state trophy along to his players. And as the players celebrated with their shiny new medals, Lance couldn’t help but think back to when he had only positive reinforcement to pass around, trying to find the hope in multiple losing seasons.

“Alonso said [earlier this week] that there were games we were trying not to lost by 20,” Lance said of the team’s early years before the fateful merger. “That’s how it was in the beginning. But these kids, I don’t know if they saw the bigger picture, but they committed to the hard work. That’s hard to do as a 15- or 16-year-old kid, to buy into that, when you’re getting your butts kicked every single day.”

Lance was already building momentum prior to the merge, but reinforcements from Two Rivers like Gonzalez and Emanuel represented the necessary final boost to complete Innovation’s rapid ascension to state lore.

“It’s been the perfect mix,” Innovation athletic director Jonathan Winer said. “They probably have about half and half between [the team] in terms of players [from Innovation and Two Rivers].

The merge was the missing piece for both schools, but even some of those involved couldn’t see the marriage turning into a state title in just two seasons.

“After last year when we had Cromwell in the quarters at their place and couldn’t close it out…I thought we would be back,” Winer said. “But to see it happen is amazing.”