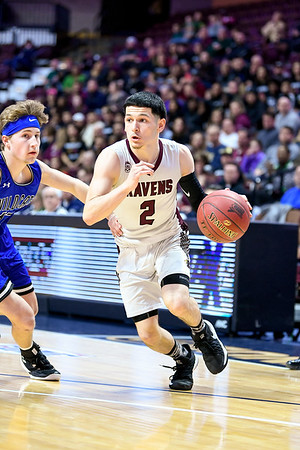 UNCASVILLE - As he gathered his group for what would be the last time, Matt Lance had a final message for his seven seniors on the Innovation boys basketball team.

“When you come back, and you darn well better come back, you rock that ring in our gym,” the head coach said.

The impassioned postgame speech came about 20 minutes after the Ravens had dismantled Old Lyme, 62-41, to capture the team’s first state championship in the six-year program’s history on Sunday afternoon.

Those closing, gripping moments of the season - with junior LJ Hazelwood tugging at the net wrapped around his neck and the players smiling at the first-place plaque they had just earned - represented how far the team has come in the last few years.

Lance took the reins of the program in 2015-16, and two years later, he was faced with a task just as difficult as the one he faced in his rookie season in which he had to lead the team out of an 0-15 record when he had to incorporate two different sets of players from two different schools. With the merger of Two Rivers and Innovation, Lance was confident success would follow, but he was unsure how the players would get along.

“The thing is, we’re not just a team,” Hazelwood said. “This is a family. We built such a strong bond with each other.”

The players jelled, figured out where each other’s strengths and weaknesses lied and formed off-court friendships and on-court chemistry that has left a legacy that won’t soon be forgotten by friends, fans and family.

“The way this senior class has grown and meshed and gotten along has been really cool to see because I wasn’t apprehensive, but I was a little unsure [how they would get along],” Lance said. “I had some of them in eighth grade when I coached the middle school team. We’ve been through tough seasons, and when we merged we tried to build the expectations of, even though we’re from a small conference and come from a place where some people still don’t know who we are, it’s on us to fight and on us to do things that’ll get respect.”

In a way, Lance has matured right alongside his seven seniors. He walked into the gym at Innovation with little basketball coaching experience, and the players had experienced little success. But after the last two seasons ended with 16 wins and 24 wins, respectively, that has all changed.

“I think, competitively, they’ve made me a better coach,” Lance said. “I’m gonna miss [seeing them and talking to them] every single day. They’re a really special group. I don’t know if you get a group of seven guys like this ever again. I’m excited, and I feel like they’ve laid the foundation for the younger kids. They’ve seen how hard our seniors work, and this is what we have to do. I’m very grateful for them.”

The seven senior champions include Lenny Okonya, who has been with Lance since he was an eighth-grade assistant and knows Lance’s expectations for him were always “sky high.”

Ramiesh Bogle is “one of the nicest kids” Lance has ever coached and is a “super great student.” Carlos Gonzalez and Christopher Sanders are “super competitive.” Julian Figueroa, in his first year with the team, is one who Lance doesn’t “think realizes how important he is at keeping the team together like this.”

Armoni Alonso’s “growth and journey has been absolutely incredible” since he was a freshman, and Lance sees a lot of himself in Lester Emanuel, a “competitive and strong-willed” guard.

“Some of these kids, I hope and feel like, we’ve built relationships where I’m gonna be hearing from them for a long time,” Lance said. “The different personalities [are what I’m gonna miss the most]. Even though we’re one group of all these seniors, every single person is just so different. They bring something different. I can’t pinpoint one thing I’m gonna miss about them. It’s just being around them every single day. It’s usually the best part of my day is being able to coach them. I’m gonna miss having that every-day interaction with them.”

Lance isn’t the only one who will miss these days. His sentiments were echoed by the team’s senior point guard.

“There’s something about each of them individually I’m gonna miss,” Gonzalez said. “I wouldn’t change this team for the world. If you could tell me I could play on any other team and do it any other way, I would not wanna take it. I’m here for these guys, and I couldn’t have it any better way.”