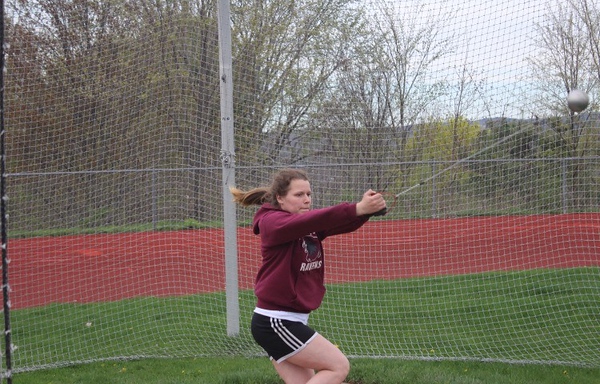 NEW BRITAIN - As Innovation senior Morgan Sartor went through her warmups on Friday, April 12, there was a sense she was going to have a good day.

Sartor, who had spent the majority of the summer working on her technique for the hammer throw event, was launching the weighted ball to encouraging distances, and her track and field coaching staff took notice.

On Sartor’s third throw of the meet, she spun and sailed a throw of 125 feet, 10 inches, enough to become the first athlete at Innovation to qualify for the New Balance National Championships in June.

Sartor, who has dreamed of competing nationally since she was a freshman, knew upon release that her throw might bring about something special.

“Everything just felt right with that throw,” Sartor said. “In all my previous throws, there was something always wrong with it. But that one, everything just came together. I knew as soon as it landed that it would be the mark I need.”

The history-making throw for Sartor may have felt flawless when it left her hands, but her journey to the national championships has been anything but seamless.

Standing at roughly 5 feet, 6 inches, Sartor is significantly smaller in height than other athletes competing in the hammer event. Most athletes use their God-given size to create momentum before unleashing a throw, but Sartor faced a unique challenge once she started competing in hammer, realizing her size would be a tough obstacle to overcome in events like shot put and discus.

“Those events, you need height and strength,” Sartor said. “With hammer, one of the things that sets me apart is my speed. I’m able to use that speed, and it’s been much better to go with my build and body type.”

Sartor had plenty of speed, but no experience in the hammer throw when she entered her junior year.

Still figuring out a way to record respectable throws despite a height disadvantage, Sartor recorded a throw of 64 feet in state competition last spring, shy of her personal best of 72 feet, 6 inches.

It wasn’t the desired outcome for Sartor, but when her new throwing coach Mahl came to Innovation, she found a mentor who had once faced a similar challenge when he competed in the hammer in college.

“I was super small and 5-foot-4 compared to guys throwing that were 6-foot-4 or 6-foot-6,” Mahl said. “I knew exactly where she was at. It’s tough, but she hasn’t let it be a negative on her. She focuses on other things and uses it to her advantage.”

In addition to speed, one thing Sartor has used to her advantage is a tireless work ethic. Through the hot summer months, she worked on her technique and maximized her speed to build momentum into her throws. Suddenly, by the end of summer, her throws reached 115 feet, 51 feet better than where she finished in states just three months earlier.

“Towards the end of the summer, it was in the back of my mind, but I never thought I would actually [qualify],” Sartor said. “But I kept working at it because I knew I had never practiced like that before. If I kept working on it, I realized it was something I could actually hit.”

So Sartor kept throwing, tweaking her technique as each throw was further than the last. Her distance had already reached another stratosphere compared to her junior season, but it wasn’t enough. Sartor wanted to throw with the best high school athletes in the nation when mid-June rolled around.

“I don’t know if I’ve seen any athlete, not just a track athlete, who puts in as much work as she does,” Innovation track coach Matt Lance said. “She does so much early morning lifting and throwing, to the point where we have to encourage her to rest, because of how much time and effort she puts into training. I don’t want to say [the improvement] was expected, but it was certainly not surprising, given her training.”

Sartor’s work with Mahl reached a pinnacle on April 12, when her qualifying throw landed 54 feet further than her best score as a junior, completing an unprecedented improvement over less than one calendar year.

“I thought it was kind of improbable, honestly,” Mahl said. “But she’s an extremely hard worker and sets her goals high. She’s very detail-oriented. She’s been focusing on the small things and it’s been great to see the progress.”

If you ask Sartor, there is still more progress to be made.

Her throw two weeks ago qualified her for the national championships, but adding another 16 feet to her personal best would bump her into the Emerging Elite division at this year’s nationals in Greensboro, N.C. Sartor will already be there, but she wants to compete with the best of the best before she moves on to compete at Division-II Le Moyne College this fall.

Given the rapid improvement she underwent over the course of a year, it’s tough to doubt her ability to add another few feet to her personal best.

“It’s pretty amazing, because nobody expected me to do this,” Sartor said. “When I told people I wanted to make nationals, they laughed at me. Now that I’ve hit it, I know I can do this.”