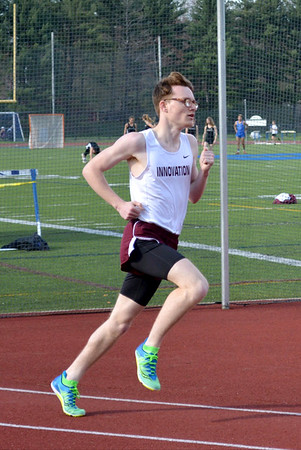 MANCHESTER - Prior to Wednesday‚Äôs boys 3,000-meter steeplechase, Innovation senior A.J. Corso struggled to get prepared for the last race of his high school career.

Corso had done everything in his power to train and condition for one of the toughest races of the year, but this struggle was out of his control, though one he was forced to become accustomed to throughout his running career.

Corso, a diabetic since the age of three, was battling to get his blood sugar level to a stable mark before running five laps around the track at Manchester High School with other top athletes in the state.

Corso hoped he would be as close to 100 percent as possible before the starting gun fired, but he also realized that in his case, 100 percent is not always an option. Still, that doesn‚Äôt stop him from running.

‚ÄúIt‚Äôs definitely difficult,‚Äù Corso said. ‚ÄúBut if you really want to get something done, you‚Äôre going to get it done regardless.‚Äù

Corso internalized that mindset and got it done, finishing the steeplechase in 11 minutes and 32 seconds, marking the end of his career with the Ravens. The final race of his high school tenure was much like the ones that preceded it: never easy.

‚ÄúMy blood sugar level was going high and then low, but I still ran and had a lot of fun,‚Äù Corso said. ‚ÄúSometimes you just have to push through some hard stuff.‚Äù

Corso has battled through the hard times since he began running in eighth grade, and has since been rewarded with a trip to Regis College this fall, where he will continue his running career after winning two conference championships at Innovation over the last two years.

‚ÄúHe could have used his diabetes as an excuse, but he used it as motivation,‚Äù Innovation track coach Bryan McCain said when Corso celebrated his college commitment.

There have never been excuses for Corso, only obstacles that at times felt greater than the ones that stood in his way on the track at Manchester during the steeplechase. Some days are better than others, but for Corso, the desired result is always the same: power through the discomfort and lace up his running shoes.

‚ÄúIf I wake up after a long night of having a high level and I don‚Äôt wake up and catch it, my legs will get numb, which really isn‚Äôt good for running,‚Äù Corso explained. ‚ÄúIf I‚Äôm low, it‚Äôs really shaky and light-headed. Earlier this year I had a race and my blood sugar dropped way below safe level, so I actually couldn‚Äôt run the race. I was really upset. After something like that happens, you just have to make sure you have a really tight hold on it for race days.‚Äù

Scary days like the one Corso labored through earlier this season could be seen as a perfectly reasonable excuse to take it easy, but Corso continues on the same way he has since he started running cross country five years ago. Those closest to him could have also deterred Corso from running given his condition, but like his coach said, it could be used as a reason to work harder instead of an excuse to not work at all.

‚ÄúThere was a lot of encouragement,‚Äù Corso said when he first brought up the idea of running to his loved ones. ‚ÄúThey said it was something that didn‚Äôt have to hold me back, and I can do what I want.‚Äù

Now, Corso is able to continue doing what he wants at Regis next season. There will still be rough mornings, but every time he battles through the discomfort and makes his way around the track, it will be another reason to celebrate was he has endured since his first race at Innovation.

‚ÄúBefore I did track, diabetes was just another thing,‚Äù Corso said. ‚ÄúIt‚Äôs actually satisfying to know that I can be independent, and I can do this in spite of the diabetes. I feel proud of everyone around me, because they all helped me. Being able to do something as demanding as long distance running is really cool.‚Äù