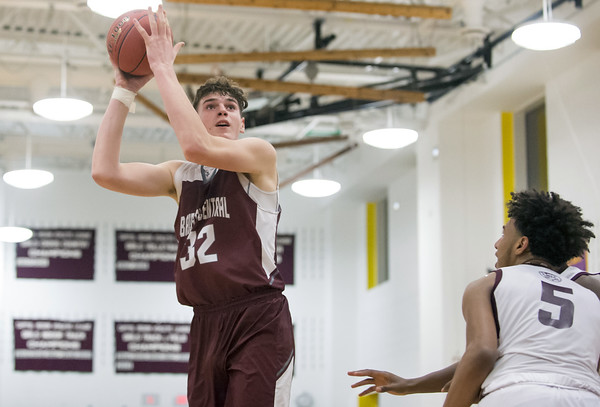 NEW BRITAIN - Heading into Wednesday nightâ€™s game between the Bristol Central and Innovation boys basketball teams, the highlight matchup was expected to be the Ramsâ€™ 7-foot sophomore Donovan Clingan and the Ravensâ€™ All-State forward in LJ Hazelwood.

But once the game got going, Clinganâ€™s size advantage proved to be too much in a lopsided game that saw the Ravens held to just 16 points, including zero in the second quarter. Hazelwood was held without a field goal, shooting 0-for-10 from the floor and finishing with just three points.

Clingan sat most of the third quarter and all of the fourth when the game was already out of reach, but still finished with 17 points, 11 rebounds and three blocks.

â€śI thought it would be much harder, but we were able to stop him,â€ť Clingan said of Hazelwood. â€śWe tried our best to lock him down. Our game plan was to stop him and make other people score.â€ť

Clingan blocked Hazelwood on a jumper from the free throw line minutes later, and early in the second quarter, Hazelwood stripped Clingan for a turnover, then hung tough at the rim to force Clinganâ€™s first missed shot of the game. It was all Rams afterward, but for the first 10 minutes of play, the anticipated battle was living up to its billing. Ultimately, an extra nine inches of height was too much to overcome.

â€śHe is amazing,â€ť Hazelwood said of Clingan. â€śHeâ€™s 7-feet tall and knows how to use his body. But what killed us was just us thinking about him and it let other players get into the game.â€ť

Clinganâ€™s presence alone made things tough for Hazelwood, who even after playing solid defense on Clingan, watched the big center kick out to open shooters left open because of all the defensive attention Clingan commands when heâ€™s anywhere near the rim.

â€śYou could tell he was bothered by his size,â€ť Barrette said. â€śThe whole team was. Weâ€™re starting to learn how to play with Donovan in the middle and using him as a deterrent and getting out to shooters after denying the middle.â€ť

On the other side, when Hazelwood got penetration and kicked out to shooters, Innovation had no such luck, hitting just one 3-pointer all game as the offense couldnâ€™t keep up with Clingan.

â€śYouâ€™re not going to get uncontested layups [against Clingan], so if youâ€™re not hitting your shots, it makes things even harder,â€ť Hazelwood said.

The game within the game was ultimately dominated by Clingan, but in the early parts of the night and leading up to the opening tip, the focus was on the two star bigs. Both teams came away from the game knowing that any other night may have brought a far different outcome.

â€śTo be honest, I thought this would be a one or two possession game,â€ť Barrette said. â€śI scouted them and theyâ€™re a really good team. Theyâ€™re better than they showed [Wednesday]. But we played well from start to finish.â€ť