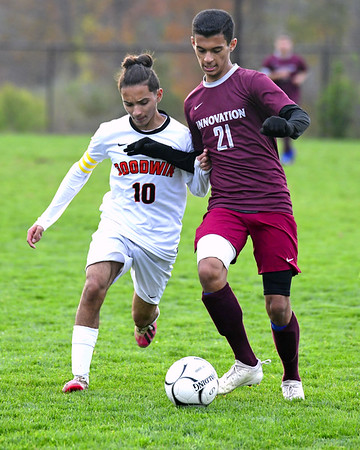 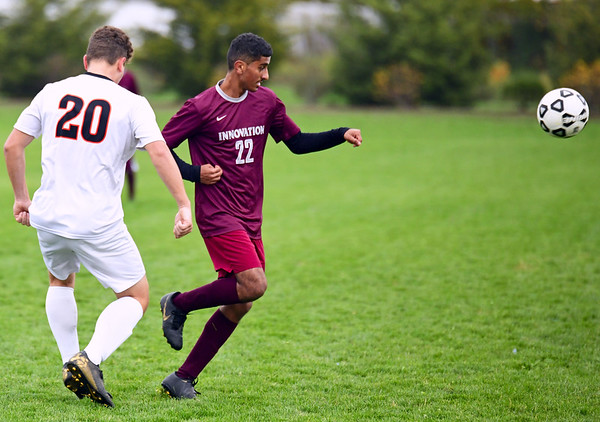 NEW BRITAIN - Cousins Waseem and Dawood Alsafari were humming on the pitch during the Innovation boys soccer team’s 3-1 win over rival Goodwin Tech on Monday afternoon.

Looking to avenge a 3-2 loss to the Gladiators earlier in the season, the family members combined for all three Ravens goals, with Waseem finishing with two and Dawood accounting for the other.

But the box score didn’t fully tell the story of the Alsafaris’ dominance. The two were menaces on the field all afternoon, assisting each other on two of the three goals, though Waseem teased Dawood after his second goal of the day, declaring that Dawood shouldn’t be credited with an assist after his touch pass found Waseem open on the left side for the putaway tally.

The on-field chemistry, family ties and playful banter gave the Alsafaris the look of two teammates who had developed a sixth sense for each other thanks to years of experience together. The duo seemed to know one another’s every move and tendency in combining to account for all of Innovation’s offense.

But the surprising revelation after Innovation’s win was that chemistry having been concocted on the fly. Waseem and Dawood are cousins, but as for teammates, that relationship had barely reached infancy by the time the two stepped onto the pitch on Monday.

Waseem and Innovation welcomed Dawood, a recent transfer, into game action for the very first time on Monday, making it his Innovation debut. Picking up a goal and an assist, both directly involving his cousin, wasn’t a bad way to introduce himself to the Ravens, and show the potential dynamic duo that began its formation in a rivalry victory.

“They have a good chemistry for the first time working together on an actual high school team,” head coach Bryan De La Cruz said. “[Dawood] is adjusting to the team. He’s used to playing with a lot of kids with a high skill level, and we have a lot of younger players, but it’s good to see them working together.”

The tandem creates more than just scoring opportunities. Both Waseem and Dawood brought a lightness to Monday’s win that matched their seemingly effortless ability to create offense. The two didn’t shy away from chirping with their opponents, but also with each other, which didn’t stop after the game was over.

“You think he’s good?” Waseem said of Dawoon after the game. “You should see my other cousins.”

Dawood laughed himself, knowing it’s only part of the duo’s identity, which they both hope will evolve into one of the top scoring threats in the CRAL through the rest of the year and into 2021 when the two will be seniors.

“We take it serious,” Dawood said. “But we also try to have fun.”

They certainly seemed to be enjoying themselves on Monday, playing much more like longtime family members and teammates than cousins who were sharing a high school soccer field for the first time. If that’s what their first act looked like, the games to come should provide even more entertainment.