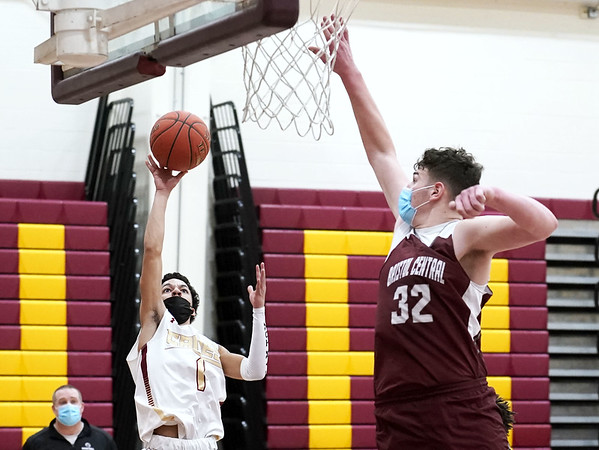 Damion Glasper scored a career-high 25 points to spark the Rams to a 73-40 win over New Britain on Monday.

Glasper scored the first six points of the second half after his team had struggled to a four-point halftime edge and Bristol Central never looked back as they ran their record to 11-0.

Both teams struggled early and were tied at 8-8 after a tough offensive first period. Glasper was held scoreless in the opening period, but exploded for 11 points in the second quarter as the Rams overcame an early deficit to pull away in the closing minutes and lead 27-23 at intermission.

It was all Bristol Central in the second half.

The Rams built a quick 10-point edge and outscored the Hurricanes 46-17 in the second half as five different players hit double-figures. After Glasper’s 25 points, Victor Rosa chipped in 11 and Sean Wininger and D’Ante Ross had 10 apiece. Donovan Clingan, who sat for much of the opening half with early foul trouble, finished the night with 14 points to go along with five blocked shots as he anchored a stifling Bristol Central defense.

New Britain’s offense was led by Justice Carter with 11 points. Tyrone Cummings added nine for the Canes. New Britain dropped to 5-4 on the season. The Canes continue a busy final week with matches against Lewis Mills at home on Wednesday, at Bristol Eastern on Thursday and home against Farmington on Saturday before moving on to the CCC Tournament.

The Rams will close out their regular season on Friday at home against Bristol Eastern in a 5:30 p.m. start.

Plainville 57, Farmington 53: The Blue Devils were in a dramatic game and the outcome came out in their favor.

Down one with 14 seconds left, TyShawn Johnson drove and found Alec Couture, who hit a 3-pointer with 4 seconds left to give Plainville an advantage. Now up two, Johnson was able to get a steal to seal the game for the Blue Devils.

“Proud of the resilience my guys showed tonight,” head coach Scot Wenzel said. “AJ Lestini and Omarion Miller carried the load offensively and end of the game we wanted to ball in TyShawn’s hands. Made a great pass and Alec hit the clutch shot. Proud of the heart we showed.”

Innovation 63, University 39: The Ravens open their final week of the regular season with their eighth win of the year behind 26 points from Mikey Blackman.

Already leading by 17 points at halftime, Innovation cruised to its second win of the season over University.

Blackman added six steals in the contest while Gabe Matias posted a double-double with 12 points and 10 rebounds. Amari Cruz added 12 points off the bench as well for Innovation, which improves to 8-1 with two games left on their schedule, including one against University. The team hosts Aerospace on Wednesday at 5 p.m.

Bristol Eastern 65, Lewis Mills 33: The Lancers improved their season record to 9-2. Eastern will conclude their regular season Thursday with an away game at New Britain. With the loss, Lewis Mills falls to 1-10.

Lewis Mills led 5-4 after two minutes of the first quarter, when the Lancers went on an 18-0 run over the remainder of the period to take a 22-5 lead. Junior Ciara Collins led the way with 13 first-quarter points. After Eastern scored the first two hoops of the second period, Lewis Mills went on a 7-0 run, before a hoop by sophomore Taigan Parent followed up by a steal and layup from senior Cali Doyon started a 12-0 run over the rest of the quarter for the Lancers. Eastern led 38-12 at halftime and maintained the margin throughout the second half.

For Lewis Mills, Lilly Martineau and Brianna Pelchar were the leading scorers with 10 and nine points, respectively.

Plainville 50, Farmington 45: The Blue Devils picked up a big win.

Down 18-5 after the first quarter, Plainville came back and outscored Farmington 45-27 over the final three quarters to move to 8-3 on the season.

Jaida Vasquez led all scorers with 21 points and Lilly Wazorko contributed 12 points for the Blue Devils.

East Catholic 4, Rocky Hill/Middletown/Plainville/H-K 2: Brody Davidson scored the first goal for the Terriers on an assist for Josh Fontaine, but the Eagles netted three out of the next four to take the game.

Connor Konopka scored the second goal for the Terriers.