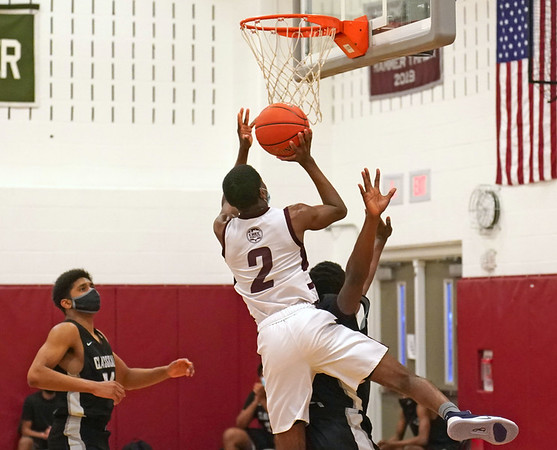 NEW BRITAIN - The Innovation boys basketball team needed a few extra minutes to complete its win over Classical Magnet in the semifinals of the CRAL Tournament.

Senior Mickey Blackman hit a 3-pointer with two seconds left in regulation to force overtime following a strong second half from the Ravens, who took control in the extra period and left the gym with a 60-53 win on Thursday. They will face Capital Prep in the conference championship game Saturday.

Blackman and fellow senior Timmy Fraylon were the top scorers for Innovation with 16 points each, while Matt Rivera led all scorers with 19 for Classical Magnet.

“I think at the end of the day, that game came down to who made plays, who made stops,” Ravens head coach Matt Lance said.

Blackman came alive in the third quarter to help pull Innovation ahead. He knocked down three 3-pointers as the Ravens chipped away early in the period. Tyvonn Thompson drilled a shot from long-range to get Innovation within one point and then a steal on the next possession led to Thompson connecting with Fraylon on a fast break for a layup to take the lead.

“We knew we had to get to the next level and this couldn’t be our last game because we fought too hard throughout the season,” Fraylon said. “Everybody doubted us that we weren’t going to the championship [game]. So we had to dig deep, get on each other, help each other out.”

The Ravens carried a light lead for much of the fourth quarter, but could not pull away. A charging foul against Innovation gave the Gladiators the ball down two points with a minute left and Rivera drilled a pull-up jumpshot from the elbow to tie the game. He then hit a nearly identical shot to take the lead.

After some fouls, Innovation had the ball trailing by three points and the play it ran coming out of the timeout gave Blackman an open three that he put through the basket.

“I really thought Gabe [Matias] was going to get the shot,” Blackman said. “They ended up doubling down on him and I was wide open and knocked it down.”

Fraylon and Amari Cruz led the scoring in overtime as the Ravens appear to have more energy left and were able to outscore the Gladiators.

The Ravens struggled to score for much of the first half, but refused to go away, trailing by five at the end of the first two quarter. They only scored seven points in the first quarter behind baskets from Blackman and Fraylon and three free throws from Thompson, who finished the game with 11 points on eight foul shots.

Rivera came alive for Classical Magnet in the second quarter to help the Gladiators build a 10-point lead early in the second quarter. Rivera scored eight of his team’s 12 points in the quarter and Rick O’Neal scored the other four, but most of them came in early in the period. Innovation was able to cut into the deficit later in the frame with buckets from Fraylon, Blackman and two others.