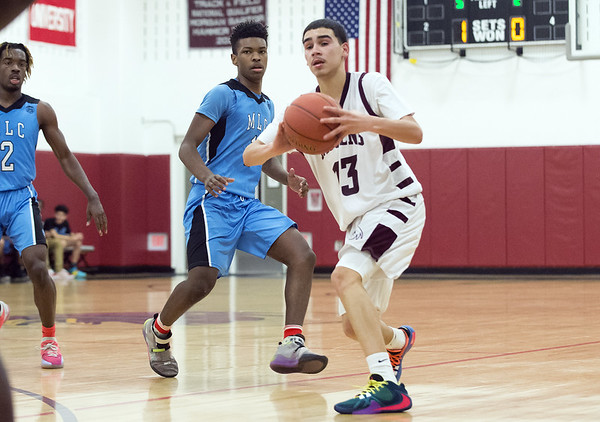 Squads became familiar with one another in the covid-shortened season as most teams wound up playing in less games than in seasons past.

Carter, a senior, led New Britain to a 6-7 record and ran the offense for the Hurricanes as the primary point guard.

“He is the ideal player for a coach,” New Britain coach Kurt Reis said. “He has all the fundamentals a player needs along with the IQ for the game. It was great to have Justice the last two years be part of the program.”

Cummings and Bishop, who recently wrapped up their junior and sophomore years, respectively, will be counted on to next season to get the Hurricanes back over the .500 mark.

“Tyrone has been part of the program for 3 years,” Reis said. “Tyrone is a player that can contribute in multiple ways at the varsity level. Tyrone has all the physical tools and ability to be very successful.

“Dontay's a great kid and played varsity the last 2 years,” Reis said. “Only a sophomore this year, he has more time to become a better player and be a major part of the basketball program for the next 2 years. The important thing is that Dontay has been very receptive to being coached in both football and basketball.”

The Ravens and the Blue Devils were next with two selections each.

Mikey Blackman and Gabe Matias were key cogs in Innovation's 11-3 season as the two seniors had tremendous seasons offensively.

"This year, Mikey really took that next step as a player,” Ravens coach Matthew Lance said. “He scored double-figures in every game but one, recorded his first career double-double (points and assists) and set the program record for assists in a game with 10.

"I was tough on him to be a much more consistent presence both offensively and defensively because I knew the team would need that from him to be successful,” Lance said. “This season was by far his best season in a Raven uniform, which was the product of all the individual work he put in during the off-season."

Blackman also earned a first team All-CRAL selection while Matias was on the All-CRAL team.

"Gabe was able to score the ball a lot for us at times this season, finishing three games with 20 or more points,” Lance said. “However, he evolved this year into a player who could do a lot more. He became a better passer and a better rebounder for us, as he had four games this year with 10 or more rebounds.

"From where Gabe started to where he finished his career this season, he is definitely a much more complete player,” Lance said. “When he first started playing as a freshman, he was known as someone who could shoot the ball. As he proved this year, he was someone who could shoot from deep, finish at the rim, or hurt you from the mid-range as well."

Tyshawn Johnson and Omarion Miller were the Plainville duo picked this year, following a cinderella-story season.

The Blue Devils only had one win through their first eight games, but caught fire late, winning five in a row en route to the CCC championship.

Blue Devils coach Scot Wenzel characterized Johnson as a leader on and off the floor this past season.

"One of the best point guards in the state," Wenzel said.

Miller was clutch for Plainville late in the season, according to Wenzel, as the Blue Devils beat Conard, 45-40, during the CCC title game.

“[He's] very athletic,” Wenzel said. “Can shoot and take the ball to the rim, has the ability to take a game over on both ends of the court. One of our leading rebounders.”

Berlin had one selection in Mike Ciarcia.

The junior guard helped the Redcoats to a 6-7 record, while averaging 11.5 points-per-game in 13 contests.

“He is a great person,” Berlin coach Mike Veneziano said. “He is always first to practice and last to leave, a throwback gym rat. If there is gym time available, Michael is there.”

Dylan Olson earned a spot on the All-Herald Team from Southington.

Despite a 3-6 record, the senior forward put together a noteworthy season for the Blue Knights.

“Dylan applied himself to the absolute best of his abilities day in and day out,” Southington coach John Cessario said. “His embrace to recognize and persevere through the challenges brought upon the team during this pandemic is a great measurement of who he is.”

Goodwin concluded with a 6-8 record, but Cartagena played well all throughout the year.

“Xavier is a great talent, it is disappointing that we could not experience how good he really is,” Gladiators coach Charles Reuben said.