'We can make a run': Ravens boys soccer strives to build toward best season yet 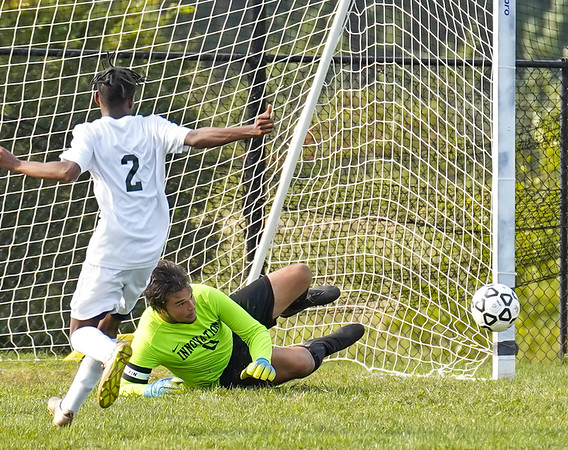 Innovation goalie Arnez Falcon dives for the ball during its game against Weaver on Wednesday. | Dan Heary Buy this photo
Published on Thursday, 16 September 2021 20:03
Written by RYAN AMES

NEW BRITAIN – The Ravens are ready to fly high.

Innovation boys soccer has assembled a gifted team this season led by the three Alsafari's (Dawood, Waseem and Yousef) who make up a chunk of its potent offense.

In Wednesday's 6-1 win over Weaver, Dawood deposited five goals to hand the Ravens its third win in a row and further raise the expectations around this year's talented group.

“I'm looking toward state's and possibly making a run,” Innovation coach Bryan De La Cruz said. “I think we have that type of team where we can make a run.”

The Ravens took care of MLC and Classical Magnet before cruising past Weaver in its home-opener. Innovation has also never begun a season with a 3-0 record in its history.

This season serves as De La Cruz's second as head coach and third with the program and the Ravens' bench boss feels his 2021 roster is capable of more success than in prior seasons.

“The other teams we had, my first year as an assistant coach, we had some guys that were really a threat offensively, but we didn't have enough of the other guys to fundamentally compete at the varsity level,” De La Cruz said. “Last year was kind of the rebuild year to put things in place.”

“This year with the seniors, Dawood and Waseem, and a couple of my sophomores, we're in a position to do something different this season.”

Waseem was a member of the 2020 All-Herald Boys Soccer Team with his impressive junior season and looks to have picked up where he left off this year.

Innovation also appears to be set in net with senior Arnez Falcon. In Wednesday's victory, Falcon made 10 saves for the Ravens and looked calm and collected while doing so.

“They're having fun and I'm glad they're having fun,” De La Cruz said. “They're looking to do something different this year and take advantage of every game and get 'W's.”

Innovation hasn't won a playoff game since 2017 when it beat SMSA 1-0 in penalty kicks. As the current No. 2 ranked team in Class S, the Ravens have come out of the gates with momentum and purpose.

Parish Hill, the top team in Class S, will be Innovation's next test and a win would go a long way in solidifying itself as a legitimate threat on the pitch.

“We're excited about the upcoming season,” De La Cruz said. “We got Parish Hill on Friday so [Wednesday] was a little bit of practice to look forward to the next game.”

Parish Hill concluded the 2019 season with a 10-4 record and the eighth-seed in the Class S tournament.