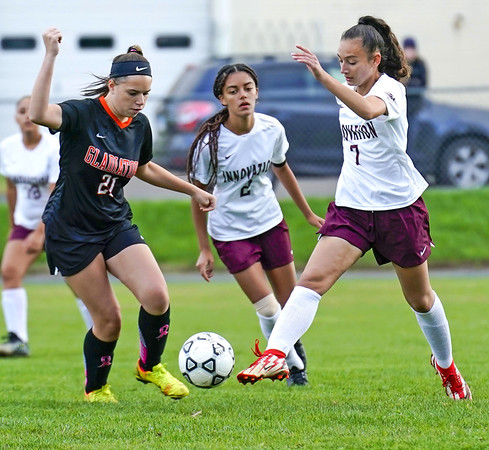 Bidoae netted a hat trick during the first half, before slinging in her fourth strike during the final frame as the Ravens improved their record to 4-3-2 in the victory against the Gladiators.

“I think I just started to want it more,” Bidoae said. “My coach keeps telling me that I can do whatever I think I can do, I just have to put in the effort and I have to just keep going. I wanted it more, that's how it was at the end of the day.”

Naida Dautovic and Kaylah Forde also potted goals for Innovation, while Jillian Yezierski provided both of Goodwin Tech's markers in the second half.

“She's spectacular,” Gladiators coach Chris Lynch said about Yezierski. “She could do set pieces for the boys team. I haven't seen that many guys kick that well. She probably has at least 10 goals now so she's done well.”

The Ravens went ahead 1-0 during the first half on a penalty-kick conversion from Bidoae, after a Goodwin Tech defender was called for a hand-ball inside the box. Gladiators goalkeeper Arianna White left the game with an injury after Bidoae's opening goal.

“We don't have a back-up goalie,” Lynch said. “We don't even have the personnel to be able to train a back-up goalie. We had three of our best players out today. Megan Lukaszewski has been out with a concussion, Tamoya Bennett our best defender, and Ericka Aponte all weren't here today.”

Innovation quickly pushed its lead to 3-0 on two more tallies from Bidoae, before Dautovic closed out the half with a strike from the left side of the field to make it 4-0.

Forde bumped the Ravens lead to 5-0 with a goal during the second half, which was followed by Bidoae's fourth after curling in a corner kick shot from the left flag.

Monday's victory was just the second time all season Innovation has compiled five or more goals in a game. The Ravens beat Prince Tech, 7-0, earlier this season.

“My senior captains are actually doing a great job,” Innovation coach Cristian Irizarry said. “I have one on defense, my two strikers are actually captains, so they're starting to figure it out with the younger girls. We do have three freshmen up and our defense is actually coming together.

“We struggled at the beginning of the season and now everything is coming together,” Irizarry said. “Our defense is playing well and our offense is grooving.”

Yezierski put Goodwin Tech on the board with a free kick goal that floated into the top left corner of the cage late in the game, before grabbing her second of the contest as time was expiring.The Gladiators fell to 2-9-1 in the defeat.

Innovation will play three more times this week and each one will likely have important playoff implications, but the victory over the Gladiators has the Ravens feeling confident.

“This is definitely a really big win,” Bidoae said. “Coming off of Friday's win, we all got really excited and this game, everybody was a little bit confused, are we gonna win, are we gonna lose, but after today we started gaining momentum for the rest of the week.”

Innovation took down Parish Hill, 3-0, on Friday after dropping the first meeting between the two schools earlier this season.

The Ravens will travel to Capital Prep on Tuesday while Goodwin Tech will host Windham Tech on Wednesday. Both games are scheduled to kick off at 3:45 p.m.