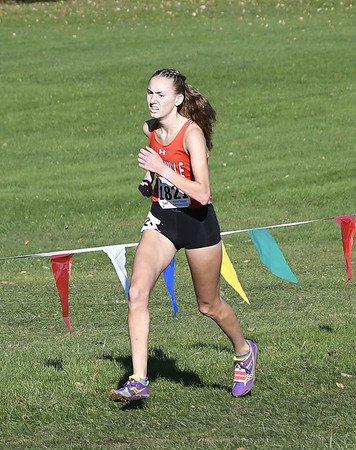 Colin Reilly was the leader for the Falcons, running a time of 17:58 for seventh-best in the class to earn him a spot in the State Open on Friday. Matthew Doherty was after him in the team's finishing, crossing at 19:13 for 26th-fastest.

For Terryville, their No. 1 runner was Nicholas Fisco, who earned a spot at the State Open with a fifth-place time of 17:49. Two other Terryville runners raced Monday, with Ryan Laskowski running a 21:00 for 67th and Colby Pronovost running a 24:58 for 126th.

Innovation also had three runners, with Simon Mamaclay's time of 21:14 behind the leading time for the Ravens. He was 75th.

The St. Paul girls team scored 268 points in the Class S girls race, finishing 11th in a field of 14. The leader, Somers, scored 48 points with all five scoring runners placing 21st or better.

Terryville and Innovation's girls teams did not score as a group.

Madalyne Bielecki was the leading runner for St. Paul, finishing 18th in the field at a time of 22:29. At 26:12, the next St. Paul girl crossed in Elizabeth Speaker. She was 69th.

Adriana Varela-Marin and Calista Oria were one second apart at the finish, placing 75th and 78th.  Varela-Marin clocked a 26:46 while Oria was at 26:47.

Kaitlin Deforest was one of two Terryville runners, and found her way near the front early, maintaining her pace for a time of 21:16 to finish seventh. Her time earns her a spot in the State Open.

Fellow Terryville runner Taylor Barnett was 85th in the field, finishing at 27:26.

Innovation's Elyse Joseph and Natalia Torres also finished the Class S race. Joseph finished at 29:08 for 106th and Torres crossed at 31:05 for 112th.