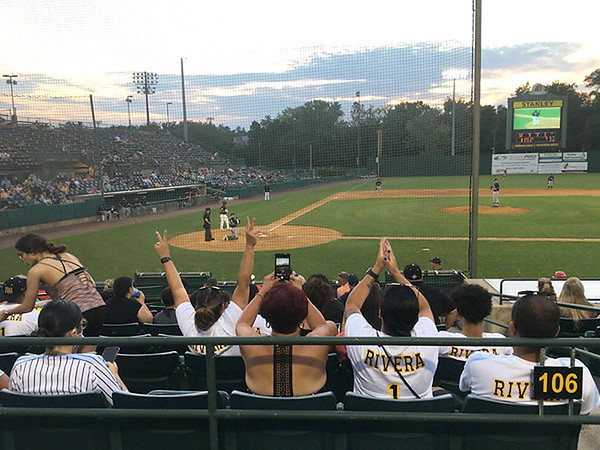 The New Britain Bees began the week in last place in the Futures League after a 12-9 loss to the then-last place Brockton Rox on Sunday afternoon, and were hoping to use this week’s action to make up ground in the standings, especially in an abbreviated season where each game carries more meaning toward playoff hopes.

Instead, the Bees found more inconsistency.

Following Wednesday’s action, New Britain fell deeper into the Futures League basement, dropping to 3-7 on the season with two straight losses, most recently a 6-4 loss at home to the Westfield Starfires. With just one month to go in the season, the Bees have to get it going soon before their deficit is too deep to overcome.

Here is how the week shook out for New Britain:

The Bees’ began the new week on Tuesday night following a day off on Monday, taking on the North Shore Navigators on the road. It was New Britain jumping out to the early lead, pushing across two runs in the top of the second thanks to a leadoff double by Andrew Cain, who is now batting .410 on the season, good for second in the league, and an error on the infield to later allow him to score. Kyle Brennan ripped an RBI single later in the inning to give the Bees a 2-0 lead, but the Navigators answered with two of their own in the bottom of the inning to tie the game.

The Bees took the lead back for good in the fourth by capitalizing on more North Shore miscues. David Howarth started the rally with a single, then advanced to third on an error and later scored on a sacrifice fly by Brennan to put New Britain ahead 3-2. The pitching staff took it from there, getting seven innings of one-run ball from Drew Mead before Tyshaun Diaz closed the door with two shutout frames.

Mead struck out 10 in one of the most dominant starts New Britain has seen so far this season.

The Bees were in position to pick up a second straight win the following night against the Nashua Silver Nights, leading by one in the top of the ninth, but this time, the bullpen couldn’t finish the job.

Ben Talbot came on to close in the ninth with New Britain ahead 3-2, and Lucas Stalman greeted him with a solo home run to tie the game. Nashua later loaded the bases with two outs, and cashed in with a two-run double by Mike Rounds to extend the lead to two.

The Bees were in prime position to walk it off for the win when they loaded the bases with one out, and when Cain was hit by a pitch to score a run, New Britain needed just a base hit to win the game. But Mike Caruso and Tony Socci each struck out to end the game and strand the winning run on second base.

Determined to erase the missed opportunities from that loss, the Bees jumped out to a 2-0 lead in the first inning of Thursday night’s game against the Starfires on a two-run double by Socci. The Starfires tied it in the top of the sixth, but the Bees took the lead right back thanks to an RBI groundout from Caruso. But New Britain once again couldn’t hold the late advantage, as Westfield scored twice in the eighth and once more in the ninth to come away with the 6-4 win, and keep the Bees three games behind the first-place Worcester Bravehearts.