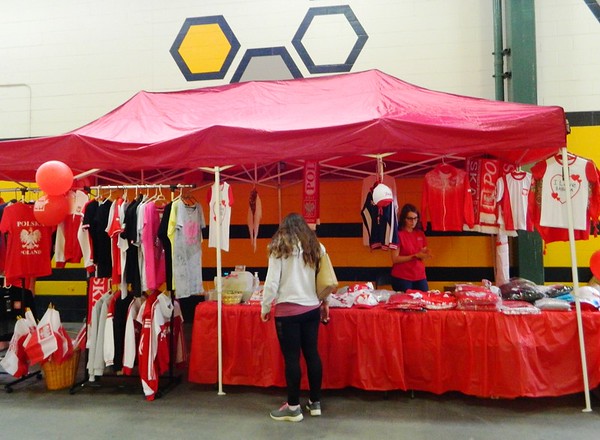 Erica Drzewiecki | Staff -- Volunteers from the Forever in My Heart Foundation run a raffle during the New Britain Bees' Polish Cultural Day Sunday. Buy this photo

The all-American pastime of baseball mingled with Polish culture at New Britain Stadium Sunday. The Bees’ first-ever Polish Cultural Day featured the best of the city’s Little Poland neighborhood, from mouthwatering foods and the Broad Street Band, to Polish-American artists and business owners.

The not-for-profit FIMH rescues and trains neglected dogs to become service animals for disabled veterans. While based in Middletown, the organization has close ties to New Britain’s Polish community.

“We hope this is the beginning of a long partnership with the New Britain Bees,” volunteer Deb Sanders said.

Her husband Doug is on FIMH’s Board of Directors and is currently fostering a service animal for the organization.

“This is Banner,” Doug said, accompanied by a diligent German Shepard who is training to become a companion.

He strolled around the stadium talking to visitors to raise awareness about FIMH and its mission.

“There’s so much need out there,” he said. “These dogs can make such a difference in people’s lives.”

The Boldowski family purchased some typical stadium snacks before heading up into the arena to watch the game.

“It’s perfect; we’re enjoying ourselves,” Wojcich Boldowski said as his wife Sylwia and their son Matthew went up the stairs to find seats.

It was the family’s first visit to New Britain Stadium and it began with Matthew dancing with other students from the Polish Language School and VOLTA Studio, based in Plainville.

Euro American Home Care and Pol Mart were among the event’s other sponsors, and vendors sold Polish-themed clothing, food and memorabilia on site.

“We need this,” FIMH member Barbara Jurkowski pointed out. “It brings people back together. Because of covid we missed socializing; we missed events like this.”

Polish Cultural Day was not meant to replace the city’s Little Poland Festival, cancelled for the second year in a row due to the ongoing pandemic. Event organizers instead hoped to start a new tradition with the New Britain Bees.

“We always tried to capture the Polish audience in New Britain but we’ve never had an event quite like this one,” Bees General Manager Bret DeRosa explained. “It’s definitely had the biggest turnout.”

The Polish community brought in its own vendors and live entertainment, leaving the Bees to do what they do best.

“The baseball game was what we brought to the table,” DeRosa pointed out.

New Britain Stadium staff, including kitchen manager Brenda Blourde, has the opportunity to enjoy the event.

“The Polish community did their own cooking today; I just let them use my space,” Blourde said.

“This is awesome,” Petrillo said. “Homemade pierogi and kielbasa. How can you go wrong?”