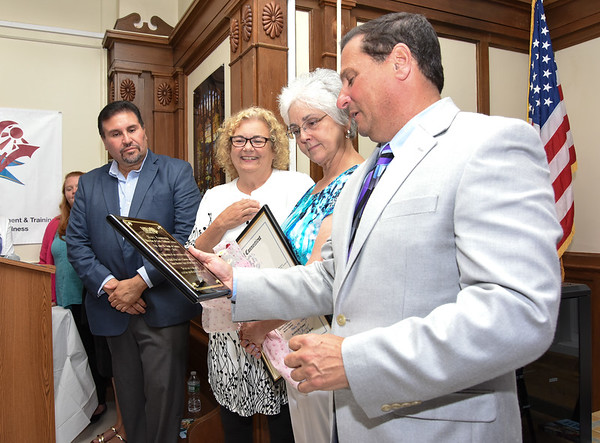 NEW BRITAIN - The Human Resources Agency of New Britain celebrated another year of serving the community Thursday night with its annual meeting and dinner.

Executive Director of the HRA of New Britain Rocco Tricarico spoke of the great work the agency has done this year, while emphasizing there is still more to be done.

“What I’m asking everyone in this room to do moving forward is to not be silent,” Tricarico said. “We have plenty of challenges, but we have to meet them head on.”

The HRA of New Britain served 26,099 individuals from 10,563 families in 2016, according to the agency. Through employment and training programs, the organization helped 4,055 people obtain jobs throughout the year. The agency employed 250 staff, mobilized 446 volunteers and engaged 120 community partners in 2016.

Following opening remarks from Tricarico, 2017 Community Service Awards were presented to those who helped the HRA flourish in the past year.

The Alton Brooks Community Service Award - an honor given to individuals whose work has been a catalyst for change and has made an impact on issues of concern to the community - was given to two individuals this year. Ann Speyer and Kenneth Speyer were both honored with the award this year for the work they put into the New Britain Food and Resource Center.

Susan Walkama and Lawrence Covino each received Community Partnership Awards during the reception.

Walkama is the President and CEO of Wheeler Clinic, which has been a partner for behavioral health services in the HRA’s Early Childcare Programs for more than 12 years.

New Britain High School senior Bryant Mercado was given the HRA’s Volunteerism Award. Mercado donated more than 200 hours preparing 100 income tax returns for his peers and members of the community.

Kim Lawther Jackson took home the Making A Difference in Our Community Award for her six-year service as the HRA Board of Directors Vice President.

Thomas H. Morrow, the former executive director of the Bristol Community Organization, was given a special recognition for his years of community service in the area.

Letisha Esnard was also given a special recognition for her work with the HRA’s Early Childhood Education program.

Mary Lombardi, the agency’s interim director of Early Childhood Education, was also honored at Thursday’s ceremony. Lombardi is retiring in August after 28 years of service.

“There’s been a lot of very good years and good times, and a few bad times,” Lombardi said. “I’ve enjoyed everyday getting up for work.”

After awards were handed out and a few raffle winners were selected and Tricarico closed with some final remarks.